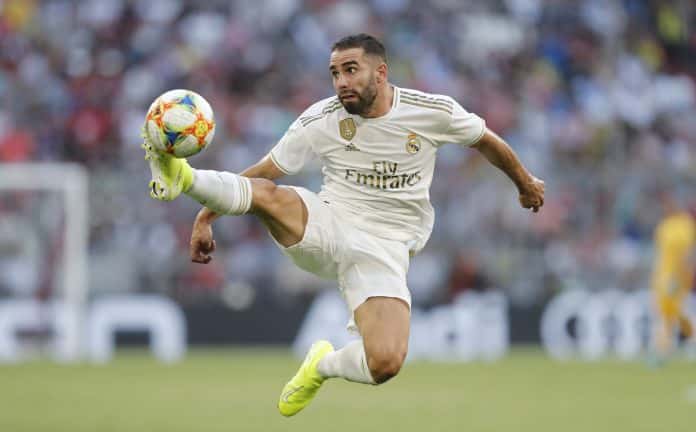 Dani Carvajal has become the first Real Madrid player to be called up to the Spanish national team in 235 days. The last time a Real Madrid player featured in Luis Enrique’s lineup was Sergio Ramos, featuring in the March 2021 World Cup qualifiers against Kosovo, Georgia and Greece.

Enrique’s Euro 2020 squad, as well as the last two international breaks, have been without any Real Madrid players. The former Barcelona boss managed to reach the semi finals of the Euros as one of the underdogs of the competition.

The last time Carvajal featured for the national team was a year ago, against Germany in the Nations League. The right-back has been out due to injuries since, and was not part of the Euros due to the same reason.

Since returning from injury, Real Madrid’s number 2 has made 7 appearances in the league this season, and also has a goal to show for it.

Lucas Vasquez, Marco Asensio, Nacho and Dani Ceballos are the other possible candidates for the Spanish national team. However, due to their irregularities and stiff competition from other players, they have not been selected.

Now, Carvajal will feature for the next set of World Cup qualifiers for Spain against Greece and Sweden. But, the right-back will not be able to walk into the starting line-up. During his absence, Chelsea captain Cesar Azpilicueta has established himself as the first choice for Luis Enrique. The 32-year-old is in good form, and will be competing with Dani Carvajal for game time.