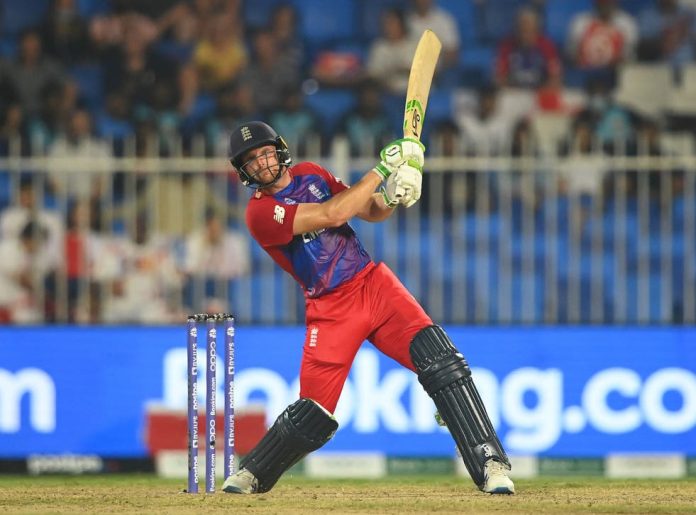 Jos Buttler finished his century with a six against Sri Lanka. It was surprisingly his first 100 of T20 World Cup 2021. He became the first British batter to get a 3-digit mark in WC 2021. With his magical performance, he joined the elite list of batters who have scored hundreds in the T20 format. It was indeed a thrilling experience for the spectators as England uplifted its performance from 35 for three to 163 runs against the opponent team.

Buttler’s amazing performance enabled him to touch the 100 mark, with many fours and sixes. If England wins the match, it can assure its place in the semifinals.

Team England was struggling at 47/3 at the end of the 10th over but Buttler and Eoin Morgan saved the team’s fate. Their partnership helped the team score a total of 163/4 in 20 overs. Buttler played carefully as, before his splendid performance, the team wasn’t doing well on the field.

He kept on playing his best game even when spinners like Wanidu Hasaranga and Mahesh Theekshana restricted the run flow in two horrific overs. Hasaranga tried not to give runs but Buttler continued until he reached the final position of hitting a century.

What England’s coach has to say on the game

England’s assistant coach Collingwood appreciated Buttler’s effort of uplifting the team’s performance from 47/3. He expected the team could not make more than 110 runs.  He stated that it was a very special as well as unpredictable T20 innings. There was no major hope till the 10th over but getting 116 in the next 10 makes it memorable. Dubai’s pitch isn’t that smooth as the pitch is on the slow side with inconsistent bounce. Despite all these tough conditions, Buttler’s performance was noteworthy.

On Dubai’s pitch, scoring runs isn’t that trouble-free as it is in England but Jos Butler’s unbelievably spectacular performance made him the hero. He got his first 50 in 45 balls but he next 50 in just 21 balls as he smacked many boundaries and 6 sixes at the Sharjah cricket stadium.