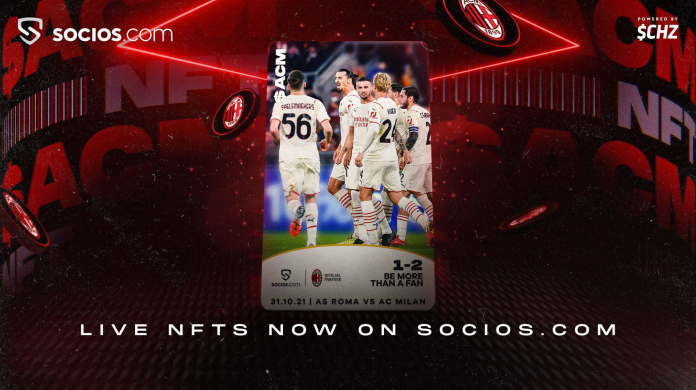 MILAN, NOVEMBER 01ST: AC Milan secured a 2-1 away victory over rivals AS Roma on Sunday evening (31/10), moving the club joint top of the Serie A table. While the game was notable for being the club’s seventh straight Serie A victory, it was also remarkable for another reason; the minting of the first ever live ‘in game’ NFTs.

NFTs – non fungible tokens – are unique, limited edition, tradable digital collectibles. In sport, they have been used to commemorate special moments and celebrate special players, but never before have they been created, or ‘minted’, live during a match – until last night.

In the 25th minute of last night’s encounter at the Stadio Olimpico, AC Milan centre forward Zlatan Ibrahimovic claimed his third goal of the campaign with a free kick from outside the area. As the striker’s teammates flocked to congratulate him, the moment was captured by a photographer and subsequently transformed into 100 limited edition NFTs.

Those NFTs were created by Chiliz, the leading blockchain provider for the global sports and entertainment industry, the creators of Fan Tokens and the Socios.com fan engagement app. Fan Tokens are digital assets that provide access to voting rights, VIP rewards, AR-enabled features, games and competitions on Socios.com.

These first ever live ‘in-game’ NFTs were then dropped to AC Milan ($ACM) Fan Token holders on Socios.com, providing them with a unique, timeless reminder of a classic Zlatan strike. As well as having sentimental value for fans, because of their uniqueness and scarcity they also have real value and can be traded with other fans on any Ethereum based NFT marketplace, such as Opensea, and will eventually be available on leading digital asset exchanges such as Crypto.com, BinanceNFT, FTX and many more.

AC Milan were the first. But, they won’t be the last.

The Rossoneri will create more in-game NFTs to reward Fan Token holders on Socios.com, but they will be joined by many more major sporting organisations in doing so. Socios.com has partnered with more than 100 major sporting organizations, including soccer giants FC Barcelona, Juventus, Paris Saint-Germain, Inter Milan, Atlético Madrid, Manchester City, Arsenal and the Argentina and Portugal national teams. Napoli were announced as the latest major club to join the Socios.com network last week. In addition to soccer, Socios.com’s roster also includes the UFC and big names from F1, NBA, NHL, esports and cricket.

While NFTs have gained fame and popularity for their value as collectors items, Socios.com NFTs will also have real utility, acting as loyalty tools, with fans holding a certain number of NFTs for their clubs to be entitled to ‘money can’t buy experiences’ as well as other digital rewards and incentives.

Alexandre Dreyfus, CEO of Chiliiz and Socios.com, said: “The first live in game NFT captures the moment Zlatan scored and fans went crazy, which is pretty cool. But, Socios.com NFTs are not just collectibles, they are ‘utility NFTs’ that will provide Fan Token holders with access to special rewards and experiences, too.

“This is big, not just because we’re redefining what can be achieved through NFTs, but also for the global sports industry. Over one hundred massive sports organisations have already joined our mission to shift passive fans into active fans through Socios.com and Fan Tokens and now they, along with the hundreds of others who will join in the future, can be part of an even broader ecosystem where live
NFTs, capturing history in the making, can be used to reward fans.”

Over 1.3M users from 167 countries are using Socios.com to engage with and be rewarded by the teams they love. Socios.com has major expansion plans and is targeting many more Fan Token launches throughout the world. The company has multiple office locations around the globe. It has recently opened new regional headquarters in Madrid, Istanbul, São Paulo and Buenos Aires, and will soon open
a North American office.