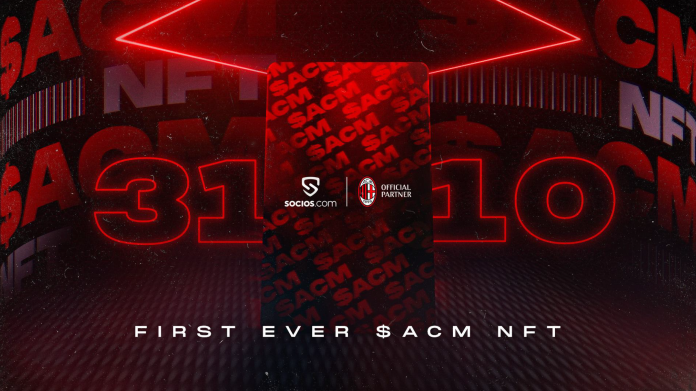 MILAN, OCTOBER 29TH: Serie A giants AC Milan will become the first of Chiliz 100+ elite sports partners to launch an NFT campaign on the fan engagement and rewards app Socios.com.

The launch will take place on Sunday (31/10) when 100 limited edition NFTs will be minted to commemorate the biggest AC Milan moment from their game with Serie A rivals and fellow Socios.com partners A.S. Roma. The NFTs will be subsequently dropped to $ACM Fan Token holders.

The AC Milan NFT launch will be the first of many similar launches to be held with the club and other Socios.com partner clubs, increasing the opportunities for Fan Token holders to be rewarded through the app and fully integrating NFTs as part of the Socios.com offering. NFTs minted for Socios.com partners will be tradable on any Ethereum based NFT marketplace.

Today’s announcement also increases anticipation for the forthcoming launch of Chiliz Chain 2.0 that will enable whitelisted smart contract developers to mint NFTs and Fan Tokens. Chiliz Chain 2.0 will use $CHZ as its native token, meaning that all transaction fees will be in $CHZ.

Over 1.3M fans from 167 countries are using Socios.com to engage with and be rewarded by the teams they love. Socios.com has partnered with more than 100 major sporting organizations from more than 20 countries, including soccer giants FC Barcelona, Juventus, Paris Saint-Germain, Inter Milan, Atlético Madrid, Manchester City, Arsenal and the Argentina and Portugal national teams. Napoli were announced as the latest major club to join the Socios.com network on Tuesday. In addition to soccer, Socios.com’s roster also includes the UFC and big names from F1, NBA, NHL, esports and cricket.

Created by Chiliz, the leading blockchain provider for the global sports and entertainment industry, Socios.com has major expansion plans and is targeting many more Fan Token launches throughout the world. The company has multiple office locations around the globe. It has recently opened new regional headquarters in Madrid, Istanbul, São Paulo and Buenos Aires, and will soon open a North American
office.

To be eligible to receive the NFT, fans need to have at least 10 $ACM Fan Tokens in their Socios.com wallet and must first predict the outcome of Sunday’s game with AS Roma using the predictor feature in the Socios.com app.

Alexandre Dreyfus, CEO of Chiliz and Socios.com said: “NFTs, from the biggest sporting organisations in the world, are now an official component of our offering for Fan Token holders.

“The AC Milan launch will be the first of many similar launches to be held with our 100+ strong roster of partners.

“In addition to bringing a collectible, tradable dimension to our offering for Fan Token holders, our NFTs will have utility, acting as loyalty tools. For instance, we envisage that holders of a certain number of club NFTs will be able to use them to unlock ‘money can’t buy experiences’ and other digital rewards and incentives.

“Fan Token holders can now look forward to a new way of being rewarded for their passion, loyalty and commitment with these super cool, limited edition digital collectibles on Socios.com.”