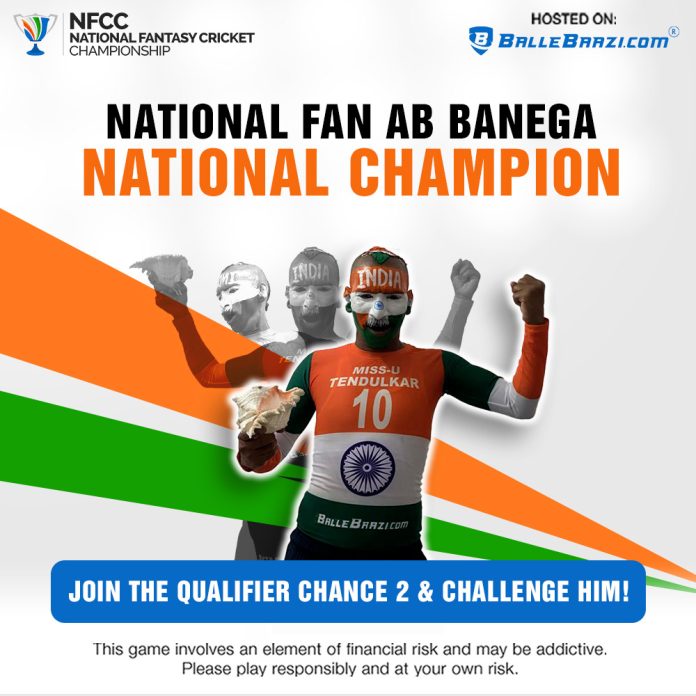 New Delhi, October 29, 2021: The first-of-its-kind National Fantasy Cricket Championship (NFCC) will now be endorsed by Indian Cricket’s Biggest Fan and Global Sports Fan Awardee, Shri Sudhir Kumar Gautam.  Known for his die-hard fandom for the Master Blaster, he will also be seen competing for the national champion’s title. Hosted by BalleBaazi.com, the association between NFCC and Shri Sudhir Kumar Gautam shall play a key role in upholding their fan-first approach of the brand.

Sudhir Kumar Gautam has been officially regarded as Indian cricket team’s biggest fan ever! Many may not know him by name, but he is certainly one of the most recognized faces seen in the audience in every important matches or tournaments of Indian cricket team. With the ICC Men’s T20 World Cup fever at its peak, Sudhir is a true representation of “Dil Se Indian” who brings together the spirit of fandom and cricket mania for the ongoing NFCC.

Sudhir is the perfect example how “Cricket is a Religion in our country” and his journeys of toil and sweat to watch each match is only an inspiration for the upcoming generation of cricket fanatics. A known figure in the stands and to the media, since 2002 Sudhir ji has been visualized with paint all over his body with the tricolor in his hand, and also sometimes with a conch that he blows fiercely at all fours and sixes.

Commenting on the association Mr. Saurabh Chopra, CEO of BalleBaazi.com, also expressed his views on the association and said, “NFCC’s whole and sole objective is “for the fans and by the fans”. Even after the commencement of the championship we felt that there needs to be a true fan to represent the spirit of the championship and who can epitomize that better than Sudhir. We have been witnessing a significant participation in the championship from all parts of the country and with Sudhir ji onboard, we only intend to take it a level further.”