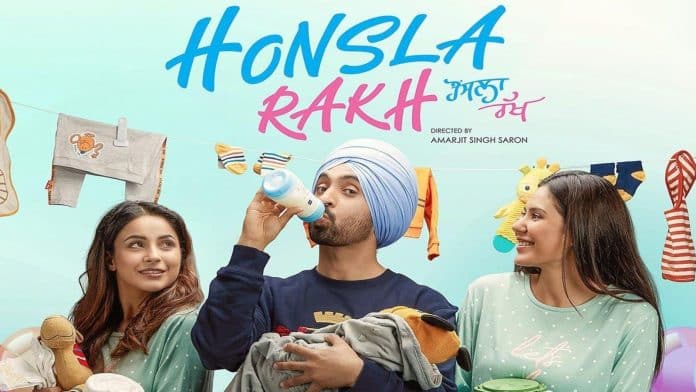 The film Honsla Rakh, a Punjabi romantic comedy-drama, starring Diljith Dosanjh and Shehnaaz Gill. As per the film’s producer Dosanjh and its lead actor, the film has become “The North Indian Film of the year”. The film has made several records at the box office. The film has earned Rs 38.15 crore worldwide within 11 days after getting a good opening in the ticket counters which is a huge feat with people still being hesitant about returning to the cinema halls.

On Twitter, by sharing the news that Diljit has turned into a producer with Honsla Rakh has written, “#HonslaRakh Madam Ji Can You Correct My Poje 👶🏽 ENJOY FOLKS 👩🏻‍🍼👨🏻‍🍼🍿🍿 @bajwasonam @ishehnaaz_gill #ShindaGrewal.” The actor posted a poster of the film featuring Shehnaaz, Sonam Bajwa, and Shinda Grewal. The poster read, “#1 North Indian Film of the year. Rs 38.15 crore worldwide gross!! on Day 11. Enjoy with your family.”

The film Honsla Rakh tells us about the story of a single father named Yenkey Singh played by Diljith. He found his love once again in Jasmin played by Sonam Bajwa, but his life once again goes on a toss after his former partner returns back to him, played by Sahehnazz Gill. Gippy Grewal’s son Shinda Grewal essays the role of Diljit’s son Honsla Singh in the movie. The film was released in theatres on 15th October 2021.

The film Honsla Rakh is directed by Amarjit Singh Sarom and written by Rakesh Dhawan.

The rom-com also marks Shehnaaz’s first project after the death of her close friend and actor, Sidharth Shukla. Sidharth had passed away on 2nd September 2021, at the age of 40. After Sidharth’s death, Shehnaaz took a break to come to terms with the loss. However, she joined the promotions of the film. Diljit had called her a “strong woman” in one of his social media posts.