“The Princess Switch 3”: Vanessa Hudgens is ready to reprise her three roles simultaneously 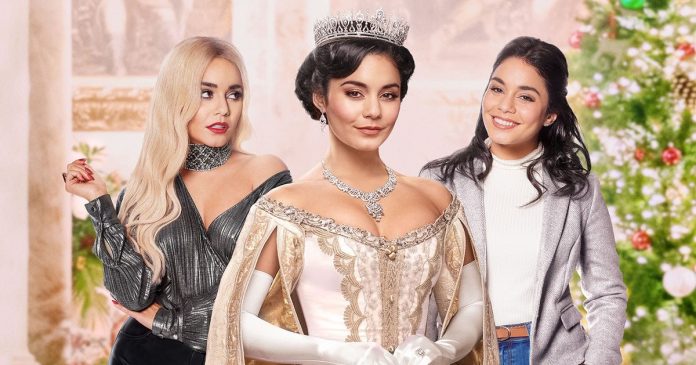 After the mysterious ending, Netflix becomes ready for celebrating the Christmas spirit from November. The OTT platform has come with several Christmas movies. It is definitely the season of celebration, in this, we will going to see Vanessa Hudgens reprise the role of the princess in The Princess Switch 3.

It is the third instalment of the movie series that is contained with something special for the viewers like Hudgens for reprising all her three roles in the lat6est flick. Netflix has recently set to drop the trailer of the film and also has been revealed the three roles of the High School Musical star.

According to the trailer, Hudgens will perform the role of the royal Margaret, Queen of Montenaro, she is looking like Stacy, Princess of Belgravia. The duo becomes a trio after the doppelganger cousin of Margaret Fiona joins them. This third adaptation of the film is based on the theft of another valuable artefact and also the finding of the quest of the princess. The official Netflix descriptions reveal that while a priceless Christmas relic is stolen, royal look-alike Margaret and Stacy turn to the audacious doppelganger Fiona and her handsome ex for help.

The trailer begins with Margaret announcing an International Christmas Festival in Montenaro. The Christmas relic is then introduced, which is a Star of Peace from the Vatican. However, it does not take much time for them to discover the Star of Peace is stolen. As the police have no leads, they seek help from Margaret’s cousin Fiona. Both Margaret and Stacy dress up as Fiona to find the Star of Peace. Fiona’s ex is also introduced in the trailer. The film is set to arrive on November 18 on Netflix.

The Princess Switchfranchise’s first outing was 2018’s The Princess Switch. The film’s plot revolved around Stacy De Novo, a baker from Chicago, and her look-alike Lady Margaret Delacourt, the Duchess of Montenaro.

The two ladies decide to switch places and fool everyone around them with their altered appearances and mannerisms to explore each other’s lives. The sequel film The Princess Switch: Switched Again also followed a much similar storyline. Seemingly the third installment will also revolve around something similar. The films casts Vanessa Hudgens, Sam Palladio, Nick Sagar, Mark Fleischmann and Rose Mclver.