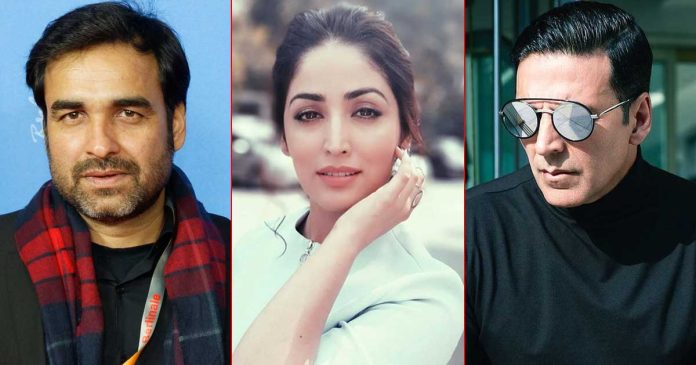 “Oh My God 2” (OMG 2) is the most anticipated film, starring Akshay Kumar in Madhya Pradesh. It also stars Yami Gautam and Pankaj Tripathi in the lead role. It has been in the news since it was announced.

Previously, it was reported that Arun Govil might play the role of Lord Ram in this film. This film is written and directed by Amit Rai.

On Saturday, Akshay Kumar has revealed the two new posters of the film named OMG 2 by taking them to his social media handles. The actor was dressed in the role of Shiva. The poster also has ‘Rakh Vishwas, Tu Shiv Ka Das’ written on it.

The first poster shows Akshay in blue, with his eyes closed and hair in dreadlocks. A silhouette of a school student is seen sitting in the bottom and the words, ‘Rakh vishwas, tu hai shiv ka das’ written on the poster. The second poster shows a blue hand, probably of the god, holding the hand of the young boy.

Akshay Kumar while sharing the post on twitter has captioned it, “Karta kare na kar sake Shiv kare so hoye. Need your blessings and wishes for #OMG2, our honest and humble attempt to reflect on an important social issue. May the eternal energy of Adiyogi bless us through this journey. Har Har Mahadev. @TripathiiPankaj @yamigautam @AmitBrai (sic).”

According to the report, it is expected that the film will start its shooting on Thursday in Ujjain, Madhya Pradesh. It is going to be a 17-day schedule in Madhya Pradesh. The ‘OMG 2’ team will be shooting at Shree Mahakaleshwar Temple, Ram Ghat, Kaal Bhairav temple, and Tower Chowk in Ujjain.

Although Akshay Kumar has a bucket full of listed movies right now. Recently he has made the announcement regarding a new film named “Gorkha”, inspired by the life of war hero Major General Ian Cardozo from the Gorkha Regiment of the Indian Army. It will be directed by Sanjay Puran Singh Chauhan. Akshay has also wrapped up the Ooty schedule “Ram Setu” with Jacqueline Fernandez recently.

“Prithviraj”: The official teaser of Akshay Kumar’s upcoming historical film has been released