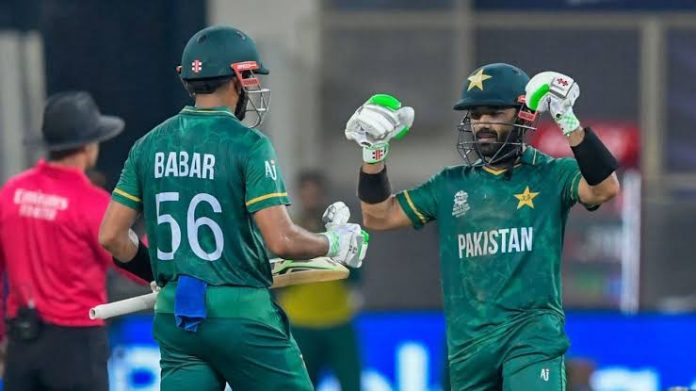 Unbeaten knocks by the opening duo of Babar Azam and Mohammed Rizwan steered Pakistan to a one sided ten-wicket win against India. This Pakistan side has finally managed to break their jinx as they won their first-ever World Cup game against India.India

Getting into details of the match, Pakistan won the toss and elected to bowl first. Winning the toss played a major role in Pakistan’s victory because their bowlers bowled brilliantly. The star performer for them was Shaheen Afridi as he broke through the opening pair of Rohit Sharma and KL Rahul in his first spell.

Thereafter India fell in more trouble as Hasan Ali picked up Surya Kumar Yadav’s wicket in the sixth over. As a result, India were in great turmoil as they finished the powerplay with 36 runs for the loss of 3 wickets.

However, Kohli and Pant steadied India’s ship as they built a 53 run partnership. Although Pant departed just as it looked like the Indian team are shifting the gears. Kohli went on to play a captain’s knock of 57 and along with the cameos of Jadeja and Pandya, India reached a respectable total. The Indian side managed to score 151 runs at the end of 20 overs.

With the pitch offering assistance to pacers early in the innings, many might have assumed that this game would be closely fought by the two teams. However, it wasn’t the case as the Pakistan openers dominated the Indian bowlers from the get-go.

Babar Azam and Mohammed Rizwan played flawlessly and didn’t give India any chance to come back in this fixture. The openers played risk-free shots and kept the scoreboard ticking. Both batsmen reached their respective fifties and made the Indian bowling attack look toothless.

Consequently, they ran over India like one-way traffic and chased down the target of 152 in 17.5 overs without losing any wicket. Therefore this Pakistan side dominated India on all fronts to break their shackles.

Player of the Match – Shaheen Afridi