Dhamaka: Kartik Aaryan has blown the internet, with his performance in the trailer 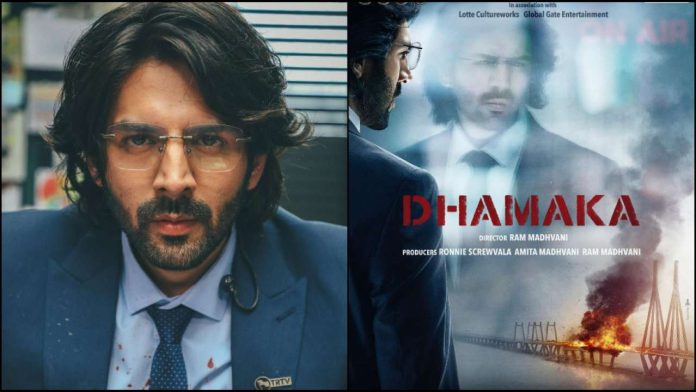 On Tuesday, i.e. 20th October 2021, the first trailer of the film named Dhamaka was released. It stars Kartik Aaryan as a news anchor. The film looks interesting as it takes us and focuses light in the middle of a crisis situation.

Dhamaka is an upcoming 2021 action thriller film. It is directed by Ram Madhvani and also produced the film with Amrita Madhvani under the banner Ram Madhvani Films, along with Ronnie Screwvala’s RSVP Movies, Lotte Cultureworks, Global Gate Entertainment, and Lionsgate Films.

In the trailer, it shows us Kartik Aaryan as a news anchor named Arjun Pathak. He was cut down from his primetime slot but a phone call from a terrorist is set to change everything. Arjun was prepared to drop a call about a terror attack on the sea link as he thought it was a prank call when the bomb actually goes off. After that, it is a race to finish as the caller calls the shot amid a heinous terror attack on the heart of Mumbai. Will the chase for TRPs become a chase for life in this film?

In the event of its trailer launch, Kartik Aaryan has shed light ib his character. He has said that ambition was driven by Arjun to make some decisions that he wishes no one should ever have to take. “A phone call changed his life and Dhamaka will bring alive this thrilling tale of Arjun.”

Earlier, Ram Madhvani had praised Kartik as an actor and said, “There is a hunger in him to excel as an actor. That craving worked well for the film. I believe Kartik has given a performance that will be talked about for a long time.”

Although Kartik has a busy calendar ahead. He will be seen in the Bhool Bhulaiyaa sequel, Shashanka Ghosh’s Freddy, Hansal Mehta’s Captain India, and Shehzaada.

The film Dhamaka was initially set for theatrical release, but now it is all set to stream on Netflix from 19th November.

Netflix’s official synopsis for the film read: “When a cynical ex-TV news anchor gets an alarming call on his radio show, he sees a chance for a career comeback — but it may cost him his conscience.”