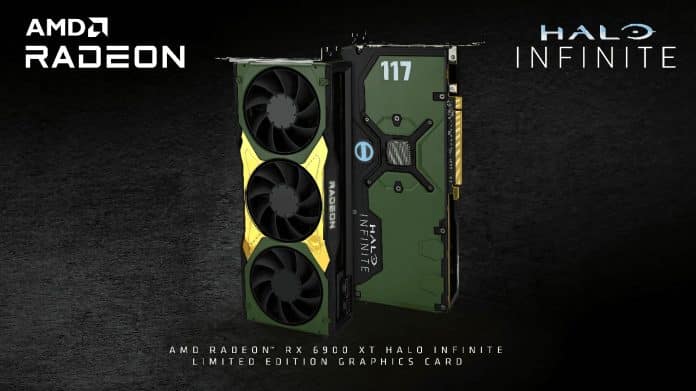 To celebrate the launch of the new Halo Infinite multi-player game as the 20 years legacy of Halo continues. AMD has become the Exclusive PC Partner of Halo Infinite and this means we will have something special from the Red team in the form of the Radeon RX 6900 XT Halo Infinite Limited Edition.

Microsoft said in a statement that AMD helped them make game title optimizations that benefit a vast range of hardware and device endpoints. They have blatantly praised AMD and have spoken about their relationship with AMD on various hardware work, consoles, from ultra-high-end gaming powerhouses to older and cost-effective gaming machines.

AMD has completely revamped its top-tier flagship gaming GPU launched last year and Microsoft says this is as a result of almost two years of collaboration with AMD.

“Inspired by his newest generation Mjolnir armour, this AMD Radeon RX 6900 XT graphics card offers a custom shroud design bearing several unmistakable features from the Master Chief himself. Including a reflective, iridium gold fan border, the iconic “117” Spartan callsign, as well as a Cortana-blue light to signify the AI slot on the back of the Master Chief’s helmet.”

- Advertisement -
Powered by JustWatch
Share
Facebook
Twitter
Pinterest
WhatsApp
Linkedin
Previous articleHow to watch Match Day 10 matches of the Serie A 2021-22 season live in India?
Next articleFIFA 22: Marquee Matchups – How to do the SBCs released on 22nd October and what do you get from it?