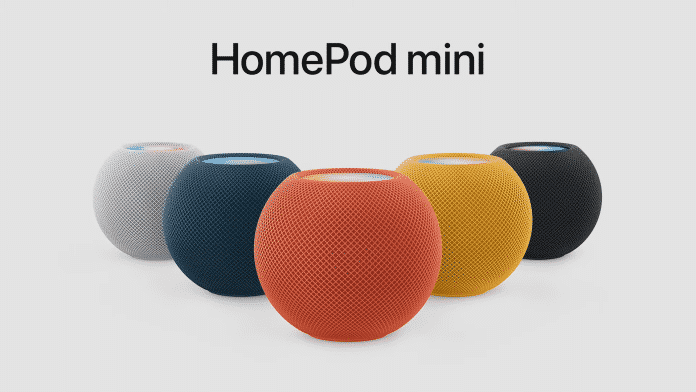 Apple launched the HomePod mini for quite some time now as their affordable smartphone speaker which costs only $99 but in India starts at a hefty ₹9900.

Until now, it was only available in White and Black variants, however, now you 3 new cool colours to choose from including Yellow, Orange and Blue. Also, if you closely notice, that these are not the generic colours that we see, the Yellow and Orange here is more vibrant as well as Cheerful, while Blue is darker as well as subtle.

Launched last year, the design of the new HomePod is very cool and the material used to make the device is quite identical to what we have seen on the HomePod. The backlit touch surface looks great and modern. Overall as per the design, the HomePod mini is very appealing enough to find a place in your house easily.

Even though it’s small, Apple says that there has been no compromise in audio experience as it is said to deliver boundary-pushing computational audio. Helping to create the full, detailed tones of a much larger speaker.

Buy the new HomePod mini in new colours from Apple India and they are available in late November.

- Advertisement -
Powered by JustWatch
Share
Facebook
Twitter
Pinterest
WhatsApp
Linkedin
Previous articleAll you need to know about PUBG: New State, coming to Android and iOS
Next articleFIFA 22: What do you get from five 350 FIFA points and one 1000 FIFA points Promo packs during Road To The Knockouts Team 2?