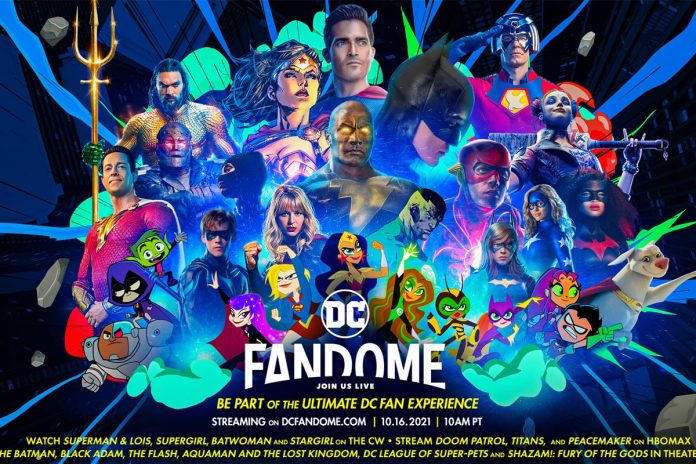 DC FanDome 2021 is finally here and we have received trailers and a sneak peek at some of the most anticipated pieces of works we were waiting for as part of the DC Universe.

The free virtual event took place on 16th October and it revealed some new footage from upcoming DC movies and TV shows.

These amazing and talented actors and creators participated in panels where they discussed DC movies, TV shows, and games.

Some of the most notable trailers and sneak peeks which we got included new footage from The Batman, Black Adam, Shazam,  Peacemaker, The Flash, Gotham Knights, and Aquaman, and of course, from Suicide Squad: Kill the Justice League.

a truly dark and interesting take of the Batman standalone franchise is here and though we still don’t know whether it will be part of the DCU that kicked off the Justice League movie in 2017.  but what’s amazing here is the fact that we strongly believe it to be set in the same universe as the Joker of Joaquin Phoenix.

Robert Pattinson looks great as batman, cat girl is amazing, and Riddler though the appearance is kept hidden for most of the time, is going to be one of the best cinematic villains we have seen so far.

finally, a real-life movie adaptation of the scarlet speedster is here and I am dying to see Keaton as Batman once more. Though we got only a small peak as to what’s in store for us it has got me hyped.

if you smell! When the rock is cooking!! the big guy one of the most ambitious projects is here and this time he is playing the anti-hero, Black Adam. Joining Dwyane Johnson is  Pierce Brosnan who will don the mantle of Doctor Fate.