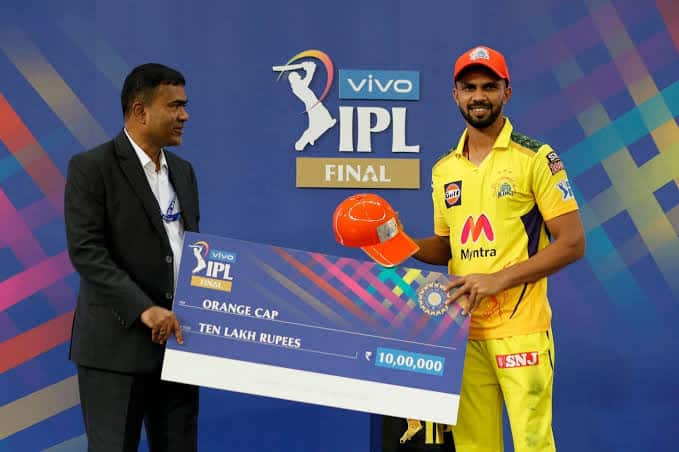 Ruturaj Gaikwad has blossomed into a superstar for CSK this season. The Chennai opener was one of the most important player for them in phase two of IPL 2021. Consequently, Gaikwad also won the orange cap of this season and became the youngest batsman to win this coveted cap in the history of IPL.

The opener scored 32 runs in the finals against KKR which helped him overtake KL Rahul and become the top run-scorer this season. With this achievement, Gaikwad also becomes the second uncapped player to have won the orange cap after Shaun Marsh. The 24-year-old scored 635 runs in 16 matches at a strike rate of 136.26.

Ruturaj”s excellent contribution at the top of the innings was one of the main reasons why CSK were so dominant this season. Along with Du Plessis, Gaikwad forged numerous great opening partnerships which helped the team set a platform at the start. As a result, both the openers applied pressure on the bowlers with their run scoring which enabled CSK to win their fourth IPL trophy.

Unlike several batsman who found it difficult in UAE, Ruturaj Gaikwad was one of the few batsman who batted flawlessly in phase two of IPL 2021. The opener has a perfect understanding of when to accelerate his innings which will be beneficial for CSK and India in the future.

Even in games where he looks unsettled, the 24 year old tackles situations with maturity. Ruturaj who made his debut last season has turned into a match winner for CSK. A majority of this credit goes to MS Dhoni. Owing to the fact that he backed Gaikwad when he failed in the first three to four innings. The CSK captain persisted with Ruturaj Gaikwad at the top and reaped the benefits this season.

With Gaikwad impressing everyone this season, it will be fascinating to see how he performs next season as there will be a lot of expectations on him.