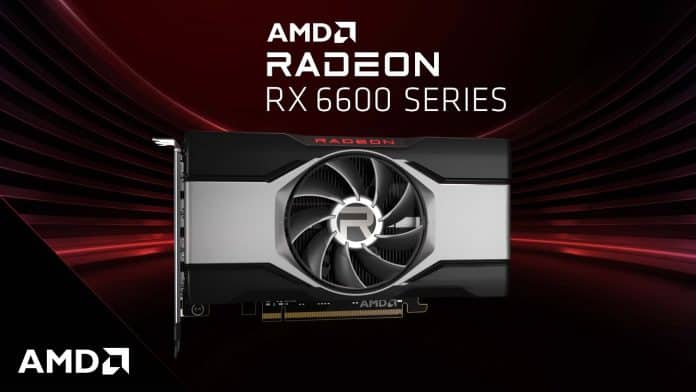 AMD India has recently announced the pricing of its budget 1080p GPU i.e. the AMD Radeon RX 6600, the new RDNA2 graphics card will start at ₹26,490 (excluding GST), making it the most affordable new GPU out there by the Red team.

However, if you add the 18% GST starting price and considering the fact that the GPU will only be sold by AMD board partners, the price will be much higher when it is available in the market. Comparing the NVIDIA GeForce RTX 3060 FE which hardly retails, but has a price of ₹29,500 whereas AMD’s new card will have a starting price of ₹31,258 including GST.

Though not a huge price difference, however, if AMD does a good job in keeping stocks, then people would pay more. Overall, the AMD Radeon RX 6600 GPU has been again targeted towards 1080p gaming as AMD states most gamers still are on

When compared to the RTX 3060, this 1080p budget graphics card gives 1.3X better performance-per-watt than the competition in select titles at 1080p max settings. It is another Navi 23 GPU with 1792 Stream Processors, with a slight reduction of 256 cores from the full chip seen in the RX 6600 XT variant.

The Radeon RX 6600 leverages breakthrough RDNA 2 gaming architecture, 32MB of Infinity Cache, 8GB of GDDR6 memory, and other advanced features to provide the performance of an enthusiast-class powerhouse in a mid-range solution. Key features include:

The Radeon RX 6600 is expected to be available today at global etailers/retailers from AMD board partners including ASRock, ASUS, Gigabyte, MSI, PowerColor, SAPPHIRE, XFX and Yeston, starting at a SEP of INR 26,490/- (excluding GST). It is also expected to be available in high-performance pre-built systems from OEMs and system integrators beginning in October 2021.