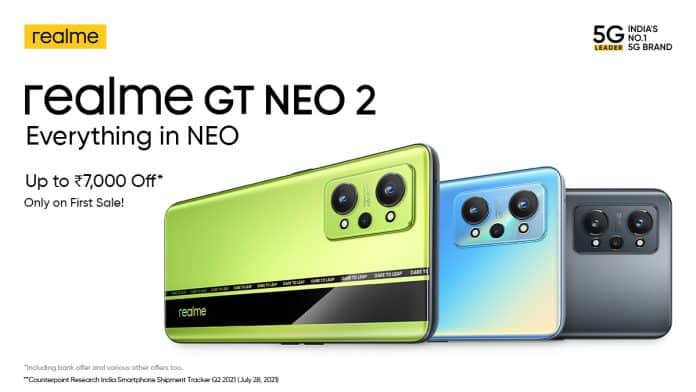 Realme held a launch event today where it launched three new products in the Indian market. The first and most anticipated product was the Realme GT Neo 2 smartphone, the Realme Buds Air 2 in Green, and the Realme Brick Bluetooth speaker amongst other products.

The realme GT Neo 2 is realme’s most polished and well-rounded flagship phone.

The Realme Neo GT 2 comes in a 12GB RAM variant with 7GB of extendable RAM or Virtual RAM with 256GB of UFS 3.1 storage space. The device comes with a 5,000mAh battery with support for 65W SuperDart fast charging. Realme claims that the device can fully charge in under 36 minutes.

The realme GT Neo 2 will give you 8 hours of gaming time on a single charge.

The realme GT Neo 2 has a 6.62″ E4 AMOLED display with a 92.6% screen-to-body ratio. The display has a peak brightness of 1300 nits so you can always see your display even on the brightest of days. It also has HDR10+ support.

The display has a high refresh rate of 120Hz, the device can adjust its refresh rate for gaming and video purposes. It offers a touch-sampling rate of 600Hz.

The realme GT Neo 2 is powered by the Qualcomm Snapdragon 870 SoC that is based on the 7nm process technology with a 1+3+4 octa-core design and a 3.2GHz Prime core.

Realme has implemented an 8-layer cooling system structure in the Realme GT Neo 2. So you need not worry about having your device heat up while gaming.

Coming to the camera specs of the Realme GT Neo 2, it has a triple-camera setup on the rear with a 64MP primary sensor, an 8MP ultrawide sensor, and a 2MP macro camera shooter.

It has a 16MP selfie shooter. The device runs on Realme UI 3.0 based on Android 11 OS. The Realme GT Neo 2 has Dolby Atmos Dual-stereo speakers, and a Matte AG finish on the rear.

As a part of a festive offer, the devices will retail for 24,999 INR and 28,999 INR respectively. They will be available from the 16th of October, 12 PM onwards on Flipkart.