Endpoint CeX will become the first UK Esports team to launch a fan token on Socios.com 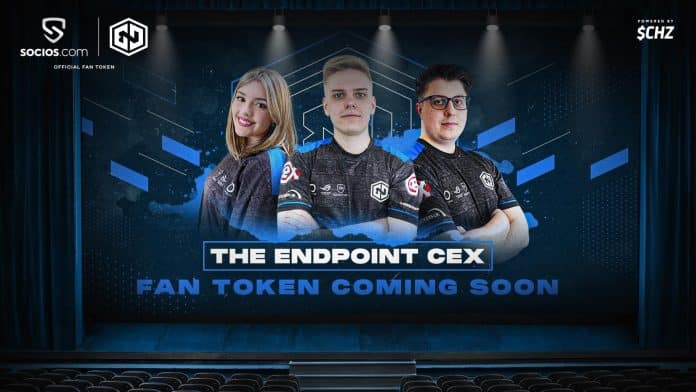 SHEFFIELD, OCTOBER 12: Endpoint CeX, in partnership with Chiliz, the leading global blockchain providers for the sports and entertainment industry, have officially announced that they will launch a $ENDCEX Fan Token on the fan engagement app Socios.com.

Endpoint CeX will become the first UK based esports organisation to join Socios.com and the sixth esports partner overall on the platform. The Fan Token Offering (FTO®)  will take place on November 18th.

Endpoint CeX will use Fan Tokens to empower their fanbase with a selection of unique and exciting rewards. Fans who purchase $ENDCEX Fan Tokens will have access to content, activations around Endpoint players, exclusive rewards from retailer CeX and the opportunity to attend events as special guests. Endpoint will also host monthly polls where its fans can vote and have a direct impact on key organisational decisions. The subject of the first poll will be announced very soon.

Over 70 major sporting organizations have partnered with Socios.com to launch Fan Tokens, including FC Barcelona, Paris Saint-Germain, Juventus, AC Milan, Atlético Madrid, Valencia, Manchester City, Inter Milan, Arsenal and the Argentina and Portugal national football teams. Socios.com is also rapidly expanding its presence in the U.S. with two thirds of the NBA on board and more teams set to follow. MMA giants UFC have launched a Fan Token as have fellow MMA organisation the PFL.

Created by Chiliz, the leading blockchain provider for the global sports and entertainment industry, Socios.com has major expansion plans and is targeting many more Fan Token launches throughout the world. Socios.com has multiple office locations around the world and has already opened new regional headquarters in Madrid, Istanbul, São Paulo and Buenos Aires. The company will open a new office in North America in the near future.

Peter Thompson, COO of Endpoint CeX said: “We are extremely pleased to bring the next level of fan engagement to our ever growing and amazing supporters. Partnering with Socios on the launch of our Fan Token is really going to help change the way we nurture and develop UK esports, especially alongside the launch of the new Endpoint HQ in 2022. We are excited to invite our fans to help shape the future of Endpoint CeX and be able to reward them in new and innovative ways.”

Frank Orchard, Franchise Director, CeX said: “CeX is excited to launch our Socios Fan Token in partnership with Endpoint. This highlights our strong gaming heritage and furthers our investment in the fast growing esports arena.”Alexandre Dreyfus, CEO of Chiliz and Socios.com said:  “We’re delighted to welcome Endpoint CeX to Socios.com as our sixth partner in esports and the first from the UK. We’re fully committed to creating amazing opportunities for Endpoint CeX fans around the world and look forward to revealing more about this partnership – including details on the groundbreaking first poll –  soon.”

Previous articlePopular Esports Stars to Watch Out For
Next article“The Unlikely Murderer”: Here is the official trailer of the Swedish drama series