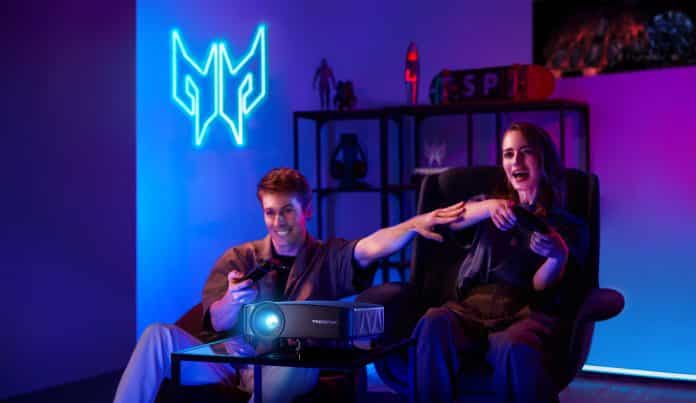 These days, not only gaming but also game streaming has become very popular, so, using traditional projectors won’t suffice for the high resolutions accompanied by high refresh rates to enjoy gaming. This is the reason why both Predator GD711 and GM712 gaming projectors have been announced.

The Predator GD711 is a smart 4K LED gaming projector that is compatible with both console and PC gaming systems. The projector also features a built-in app market that offers users access to a variety of streaming services, so you can now play on a bigger screen with the projector or flaunt by streaming it to a wider audience.

The Predator GD711 features a wide colour gamut that amounts to 125% of the area ratio of Rec. 709, covering most of the colour space within the gamut in addition to a significant area outside of it to offer gamers impressive levels of colour saturation. 4,000 LED lumens of brightness, high dynamic contrast and HDR10 performance ensures that content looks brilliant.

The projector includes several modes that users can shift between depending on their mood. Standard mode offers 4K (3840 x 2160) resolution for enjoying movies and videos in sharp detail, while two game modes—one for bright scenes, another for dark ones—let users pick frame settings optimized for the aesthetics of the game they’re playing.

The Predator GD711 projects images with a variable refresh rate mode of [email protected] Hz for consoles or up to a blazing fast [email protected] Hz for PCs, delivering buttery smooth performance even in the busiest of scenes. Furthermore, projecting at just 23 dBa when in ECO mode, this game-ready home theatre won’t break your immersion, either.

The Predator GD711 features a throw ratio of 1.22, which means it supports a wide range of throw sizes. Acer’s recommendation is a 100-inch screen thrown from just 2.70 m (8.85 ft). It also comes with the convenience of a 10W speaker and remote control that has an antimicrobial coating on its surface and buttons.

Excellent airflow dissipates heat, helping to deliver a long 30,000-hour lifespan. Connectivity options include two HDMI 2.0 ports for PCs and consoles, audio out for an extra speaker and three USB Type-A ports: One for the projector’s hidden wireless dongle, another for connecting wireless accessories, and another for DC 5V-out that also enables users to update the device’s firmware.

For users who prefer lamp-based projectors, the Predator GM712 is also available with 4K resolution and 3,600 ANSI lumens of brightness.