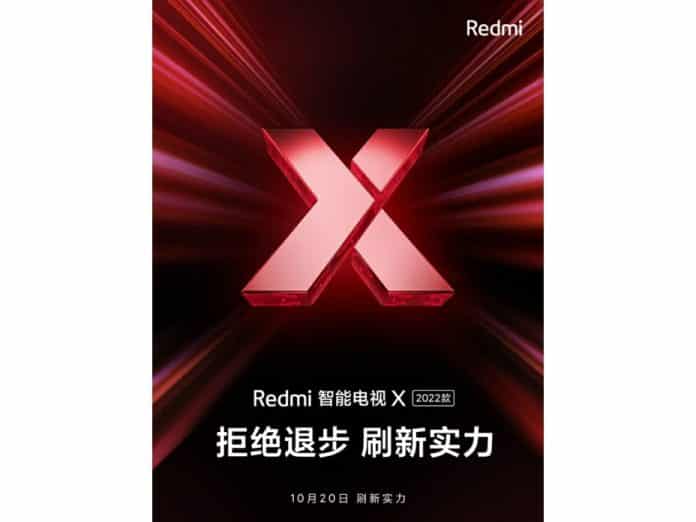 Redmi is not only limited in the smartphone industry but the company offers a variety of products and now it is officially confirmed that the Chinese brand is gearing up to expand its smart TV portfolio with the launch of Redmi Smart TV X 2022 and the company has a windmill the launching date of the new smart TV.

It is officially confirmed that the upcoming Redmi Smart TV X 2022 will be officially announced on October 20 and the company revealed the information by sharing a poster on the Chinese microblogging website. Redmi MI launch its new smart TV in its home country and that is China.

The Chinese company launched its first Redmi Smart TV X series last year in 2020. The series offered premium features such as having a 4K resolution, MEMC support, and a metallic build at an affordable price point.

Redmi claimed that the new model will surpass itself. The most recent Redmi Smart TV X series models are 50-inch, 55-inch, and 65-inch 4K Smart TVs launched in India last month. And these models come with HDR10+, Dolby Vision, 30W speakers, HDMI 2.1, and more. As such, the upcoming model will probably be a 4K Smart TV too, except with different screen sizes and features like MEMC (for 120FPS support).

The new product is positioned as a light flagship smart TV, with a metal frame and a minimalist full-screen design. The screen-to-body ratio, at 55 inches, is as high as 97 percent. The product is expected to cost 2299 yuan($359) while 3299 yuan ($512) for the 65-inch version.

Redmi Note 12 Exploration Edition: Everything you need to know

Redmi Note 12 Pro+: Everything you need to know

Redmi Note 12 Pro: Everything you need to know