OnePlus 9 RT sales will begin from October 19 in China 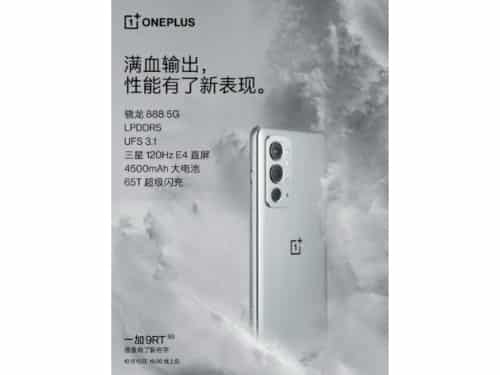 The OnePlus 9RT will launch in China on October 13, which means next week. Ahead of the launch, the Chinese company has released a poster on Weibo, which confirms that the key specifications of the OnePlus 9 RT. Some of the other teasers also confirm the colour variants, design and sale date of the upcoming OnePlus phone.

One of the teasers published by the company reveals that the OnePlus 9 RT will go on sale in China on October 19 and the pre-order window will open on October 13. The teasers also show that the new OnePlus phone will be made available in two colour options, including black and grey.

The OnePlus 9 RT is going to come with Samsung’s E4 AMOLED display, which also supports a 120Hz fast refresh rate. On the inside, the smartphone will be powered by Qualcomm’s flagship Snapdragon 888 chipset, which is one of the fastest processors for mobile phones in the Android ecosystem. Both the OnePlus 9 and OnePlus 9 Pro run on the same chipset. Additionally, the company is also fitting in LPDDR5 RAM and UFS 3.1 storage in the device, which is expected to be available in variants with 128GB of storage and either 6 or 8GB of RAM. As the OnePlus 9RT launch is taking place in China on October 13, 2021, a launch in India might follow soon.

The OnePlus 9 RT features a 4,500 mAh battery, which shall be enough for a typical day of usage. Although, since the device has a superior display and processor, a heavy user might have to charge the smartphone by the evening. As the battery also supports 65W fast charging, it is highly likely that the smartphone will ship with the fast charger in the box.

In terms of cameras, the OnePlus 9 RT will feature a triple rear camera setup on the back, with a 50MP main sensor. The new OnePlus devices seem to fill the gap between the OnePlus 9R and OnePlus 9 and could be priced between the two smartphones as well.

The OnePlus 9RT is also widely rumoured to have an India launch, although the date for the same is yet to be officially revealed. The company is yet to give a confirmation on the same. There is a possibility that the brand will bring the new OnePlus phone to the Indian market after the China launch.

Infinix Note 12i 2022 becomes officially available with a 50MP camera and 6.7″ AMOLED screen