Here’s how you can game on Linux using Steam 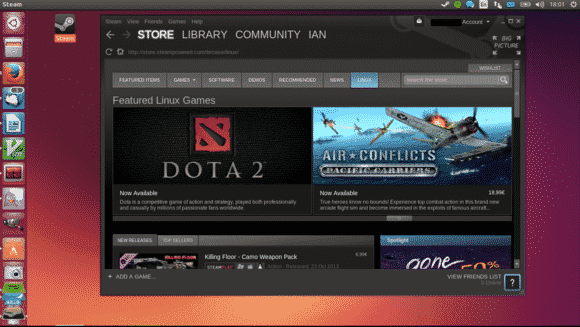 For PC gamers, Steam by Valve is the most popular option to play games, and Valve’s gaming platform offers services such as distributing, updating, and running games. Steam makes it possible to purchase a game, install it over the internet and then run it from the Steam interface.

However, what if you own a PC running our dear friend Linux, then we run into the age-old Linux gaming conundrum of support, as not every PC game is designed to run on anything other than Microsoft Windows.

But, we still have plenty of Steam games that will run on Linux, and some users even prefer running a Windows Steam game on Linux even though some ‘fettling’ by the user may be required. This approach is officially supported by Steam using a system called Proton.

So, let’s see how this works shall we?

To install Steam on Ubuntu open a terminal and type

If you’re running a DEB-based distribution, but you can’t find the Steam installer in the official repositories:

$ Sudo dpkg -I [name of archive]  as the superuser.

The Steam application should now be available via your distros menu.

Proton is an official part of Steam on Linux and makes use of both Wine and DXVK layers which translate Windows software and graphics calls into native Linux ones. The level of success of running the game on Linux is rated pretty high on ‘Platinum’. So, if you find a recent, highly encouraging report about the game running well on a similar set-up to your own, the odds are good.

To run Windows versions of games on Linux:

Some games may need special launch options to be added for them to run correctly. To do so:

1. Right-click on the game name in your Steam Library and select General.

2. Type in the launch options from the ProtonDB entry. Typically these end with the string %command%. If there are multiple launch options, ensure that there is only one %command%

You may need to edit a game INI file.

1. Right-click on the game name in your Steam Library, select Properties.

2. In the Local Files section click on Browse to locate the INI file.

That’s it, enjoy gaming on Linux.