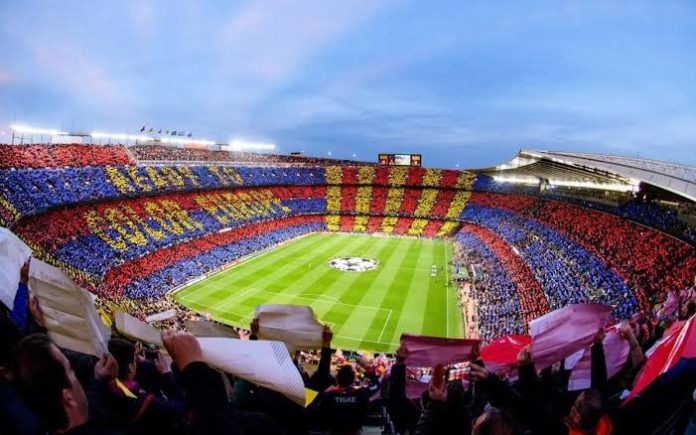 Last season all football teams had to play in empty stadiums without fans due to the covid-19 pandemic and as a result, several clubs faced major losses. However, things have become better in the last few months because fans are given permission to enter the stadium and cheer for their favourite club. Although Barcelona might undergo a major change in Camp Nou which would mean that a majority of the fans won’t be able to witness their games.

Owing to the fact that the Spanish giants are planning to move away from their home stadium and play somewhere else in order to upgrade Camp Nou. And with their current financial situation, things have to take place quickly.

Barça will have to play in a different stadium for their home games for a year while there will be a major upgrade of 11,000 seats that will be installed in the Camp Nou. If this process is successful then Barcelona’s home stadium Camp Nou will have a total capacity of 110,000.

In which Stadium will the Barcelona players relocate while the Stadium is getting an upgrade?

The Barcelona board is taking this thought of upgrading Camp Nou seriously. Therefore the main question that would come to everyone’s mind is where would Barça play their home games.

While speaking in an interview, Barça President Joan Laporta indicated that they are thinking to move to the Johan Cruyff stadium temporarily. In this stadium, Barça’s women team and the youth team play. However, the problem regarding shifting to Johan Cruyff stadium will be the fact that the capacity is only 6000.

So Barcelona might have to rethink because fans will be highly disappointed as they will have to compromise. Until now, it is very likely that Barcelona will move to their youth stadium. But they are also taking other stadiums into consideration. Nonetheless, it will be interesting to the decision of the Spanish giants.

Also Read: Football clubs with the highest number of players nominated for the Ballon d’Or 2021 award

Previous article
Will Lionel Messi win his seventh Ballon d’Or award in 2021?
Next article
Nepal vs India: Lineup and how to watch the SAFF Championship 2021 match live in India?

Gerard Pique sent off in the final match of his career