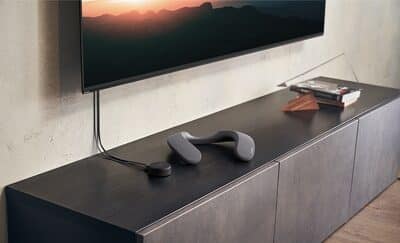 Sony has added a new wireless neckband speaker to its portfolio, called Sony SRS-NS7. This lineup is already unique in the market; on top of that, this model comes with Dolby Atmos support. Sony claims this feature makes it the world’s first of its kind of product. However, users can enjoy Dolby Atmos when s/he pair it with Sony Bravia XR TV.

A user will have the 360 Spatial Sound Personalizer application in hand to adjust Sony’s 360 Spatial Sound as per comfort. The app can also take an image of the user’s ears and analyse the hearing characteristics with it. The Sony SRS-NS7 can be paired with smartphones other than the TVs, and at that time, it enables 360 Reality Audio.

The audio output is taken care of by Sony’s own audio technologies and X-Balanced speaker units. The passive radiator assigned there helps to boost the low-frequency audio properties.

According to Sony’s words, this product can provide around 5 hours of battery life at maximum volume, which can be extended for up to 10 hours with less volume. The quick charge support allows up to 60 hours of backup against just 10 minutes of charge. It is IPX4 certified for splash resistance.

In the global market, the retail price is $299.99, which is around INR 22,000. It is in pre-order mode currently at Sony Electronics, Best Buy, and Amazon, and it is expected to come to the Indian market next week.