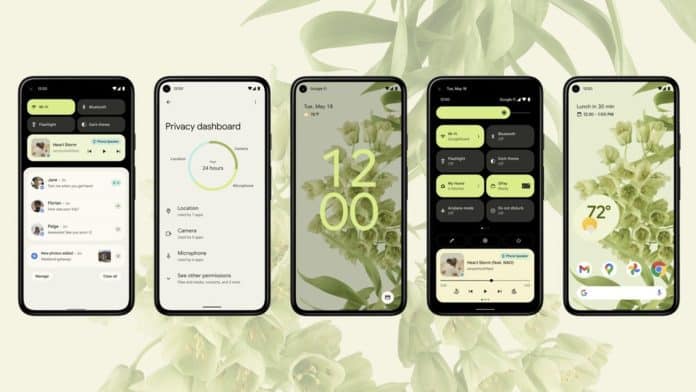 Android 12, the latest in the line of Google’s mobile OS version update, isn’t available to the general public just yet, but the launch is coming closer. Google recently wrote on its Android Developers site that it has pushed the source to Android Open Source Project (AOSP) and is “officially” releasing the update. Though technically we can say that Android 12 is available we still won’t find it appearing as an update on your Pixel phone for the “next few weeks.”

When it launches though, it’ll come to the Pixel 3, Pixel 3A, Pixel 4, Pixel 4A, Pixel 4A 5G, Pixel 5, and Pixel 5A phones. It’s the software that you’ll see on the Pixel 6 and Pixel 6 Pro as well when they launch later this year.

According to Google, the OEMs which will receive the Android 12 update will be Samsung Galaxy, OnePlus, Oppo, Realme, Tecno, Vivo, and Xiaomi devices later in 2021. Google’s Android 12 OS is mostly focused on tweaking the way how the OS looks with Google’s new Material You design language.

There are also many other features which are worth noting in the upcoming Android OS, including a new privacy dashboard offering more transparency on how apps access your location, microphone, and camera, overall, it’s not an update that aims to drastically alter how you use your phone.

With the new update, Google is trying to up its game by how users use the OS and perform their day-to-day operations, the OS will feel not much different on the outside for users, however, it will bring with it some much-needed changes and updates.

- Advertisement -
Powered by JustWatch
Share
Facebook
Twitter
Pinterest
WhatsApp
Linkedin
Previous articleSquid Game has become the biggest show ever: Reasons behind its popularity
Next articleIntel’s CEO believes that his company will take over the lead of AMD with the release of Alder Lake & Sapphire Rapids CPUs

Best Apps for Your Android Phone