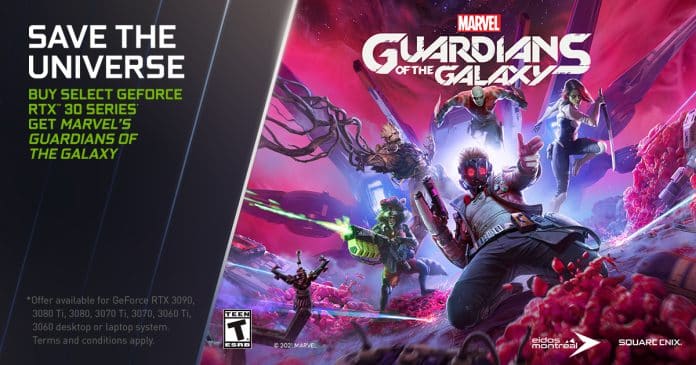 Looking to play the new Marvel’s Guardians of the Galaxy game? Well, if you are want to be a GeForce gamer, there’s some good news for you, as when you buy a qualified RTX desktop graphics card or laptop with RTX GPU you will be eligible to get a free game copy.

Today, NVIDIA announced that for a limited time, gamers will receive a digital copy of Marvel’s Guardians of the Galaxy with the purchase of a participating GeForce RTX desktop or laptop system. There’s a wide array of models on offer, featuring everything from a GeForce RTX 3060, all the way up to the GeForce RTX 3090.

GeForce Gamers will receive the definitive Marvel’s Guardians of the Galaxy experience because the game is enhanced with real-time ray-traced reflections and performance-accelerating NVIDIA DLSS.

Play as Star-Lord and lead the Guardians across the cosmos in Marvel’s Guardians of the Galaxy, arriving October 26th with ray-traced reflections and NVIDIA DLSS.

Firstly, in this game, you play as Star-Lord, the leader of the Guardians of the Galaxy. But, you won’t be able to switch between the group’s characters at all times. According to sources, players will get to make some decisions as Star-Lord and those decisions will have some sorts of repercussions, from light-hearted and small-scale to haunting and large-scale. This is one of those games where your choices will affect the gameplay.

The game developer an example video where Drax suggested throwing Rocket across a ravine so that he may unlock the path forward for everyone; however, going along with his idea choice angered Rocket, and the game made a point to note it as a result. Read more here.