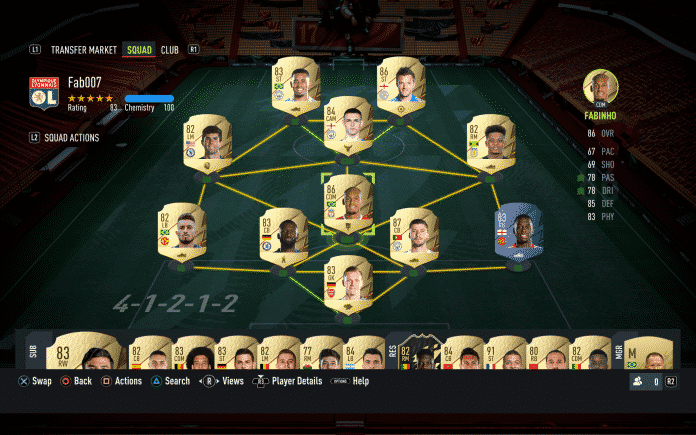 In our last articles on the new FIFA 22, we talked about how difficult it is to score a goal this time around as EA Sports has made the defence a lot better. The major upgrade we did, compared to the 85,000 coins EPL team is that we have kept making our defence better than will make progress to the attack.

Now, when you reach 120k coins, you are ready to buy someone big and here we have upgraded our attack mainly and improved our CAM for passing better balls to the forwards. So, you will need to balance your team well to get the best results and defeat teams in FUT 22; here is the best Premier Lague team under 120,000 coins:

The Chelsea Center Back had been one of the key players to help Chelsea win the Champions League last season paired with Thiago Silva. The German man is a tough guardian at your defence, even though have the same rating as John Stones, but it is due to his 75 pace, he is an expensive player in FUT 22.

You can get him for around 14,000 coins and he is a player who can easily combine with Ruben Dias and help to stop attackers running at your defence with his pace. He has 84 defending and 84 physical, certainly strong enough to lounge in tackles and help to keep your defence guarded.

We upgraded to Ricardo Pereira who is available for only 9,000 coins, however, if you want to make a solid defence you have to upgrade your right back to an even better option in the form of Wan-Bissaka, who is a really balanced option out there.

For defence, he has 81 rating in defence and is a handy option to take on attackers or deal with the threats inside the penalty box. Thanks to his 85 pace you can stop attackers running at you or just run forward to make crosses into the box posing a real threat for opponents. You can get Wan-Bissaka for 25,000 FIFA coins.

If FUT 22 had a dark horse hidden inside then that would be Manchester City’s Phil Foden, the best attacking midfield player in FUT 22. Having a blistering 84 pace and 87 dribbling makes him one of the most dangerous option going forward and has great passing 80 passing, so spending 24,000 coins on him is a worthy investment.

Daniel James is no doubt a good right midfielder, however, you have better options than him, this includes the recently transferred Leon Bailey. The Jamaican footballer has incredible pace to rip apart opponent’s defence with 93 pace and has good dribbling skills to get past your man. Though not the best for shooting but does a decent job when needed, you can get him for only 6000 coins in FUT 22.

Richarlison will not be a good option because of his average pace, the Manchester City forward is undoubtedly a better choice. The two elements of a good striker are pace and shooting, Jesus has 84 and 81 rating respectively, making him a clear threat.

You can also dribble with him to get past your man as he has an 86 rating in dribbling and can score from the header as well. You have to spend around 11k coins to get him in your squad in FUT 22.

If you need someone to have a good pace yet can take good shots in front of a goal then Jamie Vardy is your man, he has 85 pace and 84 shooting. Also, you can do dribbles and shoot when necessary, a real number 9 who can easily exploit anyone’s defence easily.

Well, the total team costs less than 120k coins as of now if you play on PC, and you can start playing today only as the game has been officially launched today, enjoy FIFA 22!!!

Order the FIFA 22 on Origin: https://www.origin.com/ind/en-us/store/fifa/fifa-22