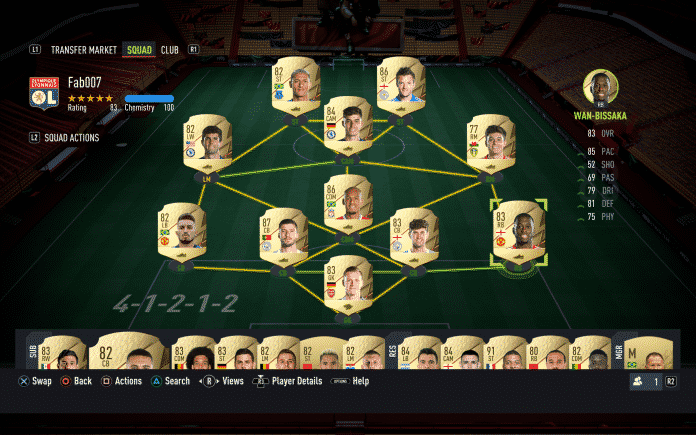 In our last articles on the new FIFA 22, we talked about how difficult it is to score a goal this time around as EA Sports has made the defence a lot better. The major upgrade we did, compared to the 70,000 coins EPL team is that we have kept making our defence better than will make progress to the attack.

Now, when you reach 85k coins, you are ready to buy someone big and here we have upgraded our attack also brought in a better RB. So, you will need to balance your team well to get the best results and defeat teams in FUT 22; here is the best Premier Lague team under 85,000 coins:

We upgraded to Ricardo Pereira who is available for only 9,000 coins, however, if you want to make a solid defence you have to upgrade your right back to an even better option in the form of Wan-Bissaka, who is a really balanced option out there.

For defence, he has 81 rating in defence and is a handy option to take on attackers or deal with the threats inside the penalty box. Thanks to his 85 pace you can stop attackers running at you or just run forward to make crosses into the box posing a real threat for opponents. You can get Wan-Bissaka for 25,000 FIFA coins.

If you need someone to have a good pace yet can take good shots in front of a goal then Jamie Vardy is your man, he has 85 pace and 84 shooting. Also, you can do dribbles and shoot when necessary, a real number 9 who can easily exploit anyone’s defence easily.

Well, the total team costs less than 85k coins as of now if you play on PC, and you can start playing today only if you have pre-ordered the Ultimate Edition of FIFA 22. Learn more here: FIFA 22: How to get a 20% discount on FIFA 22 pre-order for PC on Origin?