What do you get from the Squad Battle reward packs in FUT 22: Still garbage? 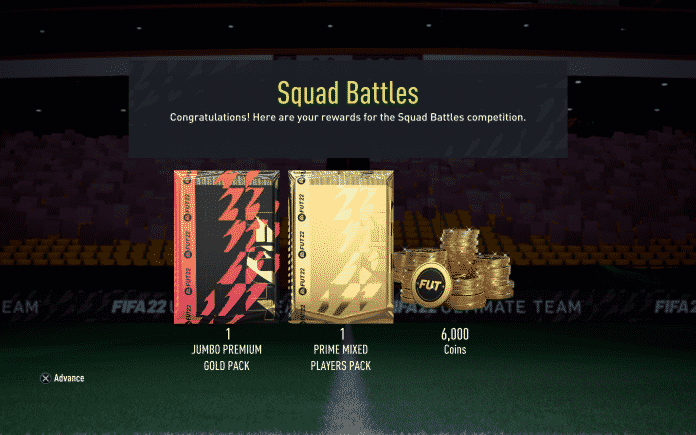 FIFA 22 is already launched days back for EA Play members and for those who pre-ordered Ultimate Edition will be able to play just recently from a few hours ago.

So, the excitement from fans is natural and to helps you make your decisions as well as expectations realistic, we have already been making a lot of content to help you make the best team or which pack should you go for, follow with the #FIFA22.

I already had the chance to play from September 22 and already played a lot of Squad battles solo or even co-op. Certainly, the quality of play has improved drastically as it’s harder to break defence this time and so you need to have a strong team whether you play squad battle or rivals.

However, playing squad battles until now was crap as the opponents were weak and you end up getting rewards that are meaningless. So, will this time you can get better rewards for completing Squad Battle? Well, for the last Squad Battle week, I was able to get into Gold II rank and for that I got two reward packs.

Then you have 6,000 coins along with Jumbo Premium Gold Pack and Prime Mixed Players Pack, so when I opened the latter pack I knew it would give crap and so it did:

So, what I did was selling them right away and getting 2000 coins whereas I was surprised to get Wan-Bissaka as right back:

The pack did end up getting me an important player, however, as I already got Kyle Walker, I would sell him anyway, still profitable as it has 25k value in the FUT 22 transfer market.

Overall, I don’t know if in future these packs will still give good players, however, for starters you can play more Squad Battle to give an headstart to your FIFA 22 campaign.

- Advertisement -
Powered by JustWatch
Share
Facebook
Twitter
Pinterest
WhatsApp
Linkedin
Previous article“Ozark(Season 4)”: All the latest updates about the season finale
Next article“Emily in Paris(Season 2)”: Netflix has dropped the date announcement teaser of the series