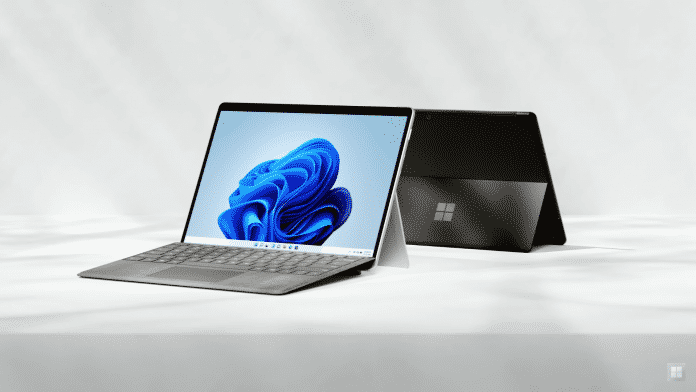 Finally, after months of rumours and leaks and suffering through plenty of speculations, Microsoft’s Surface Pro 8 is finally here and this laptop is one of the most anticipated releases from the Software giant and will carry some of the biggest updates that will come to its Intel-powered Surface Pro lineup since the Surface Pro 3 in 2014.

There are plenty of new features in the Surface Pro 8, and the first one is that it ditches all the previous display specifications and directly jumps to a 120Hz display with thinner bezels, Thunderbolt 4 support, and a new keyboard that neatly houses an upgraded Surface Slim Pen 2.

This is the Surface Pro laptop we have been waiting for after suffering through pathetic excuses of the so-called latest models. Firstly in the list of latest upgrades is the 13-inch PixelSense Flow Display, and it is larger than the 12.3-inch display found on most other Surface Pro devices, and it has a higher resolution as well.

As Microsoft puts it, the new display in Surface Pro is 11 percent larger than before, 12.5 percent brighter, and also comes with an 11 percent higher resolution. The display also supports Dolby Vision and Adaptive Color Technology. Microsoft calls it “the most technically advanced display we’ve ever built,”  and we believe you.

The bigger display is certainly better, but the most important part of the Pro 8’s display is the fact that it’s now 120Hz. By default the display runs at 60Hz however the display will jump up to 120Hz dynamically for touch or stylus tasks.

The Signature Keyboard for Surface Pro now gets a new Surface Slim Pen 2 which is similar to the keyboard and stylus combo found on the Surface Pro X. However, what Microsoft has offered inside the laptop is simply amazing, as we are finally getting the support for Thunderbolt 4. finally Microsoft is dropping the ageing USB-A port.

The Surface Pro 8 will ship with two USB-C Thunderbolt 4 ports and the usual Surface Connect port for charging the laptop will also have a choice between an 11th Gen quad-core Intel Core i5 and Core i7 processors.

We do have a Core i3 option and LTE models for those looking to buy the laptop on a little more on the commercial side. The base model will include 8GB of RAM and 128GB of storage and goes as high as up to 32GB of RAM and 1TB of storage. Microsoft says the Surface Pro 8 is 40 percent better than the Surface Pro 7 at sustained CPU performance and 74 percent faster on the graphics side.

Microsoft is starting to accept preorders for the Surface Pro 8 today, and it will ship on October 5th priced from $1,099.99.