Did Ronald Koeman give his farewell speech today? 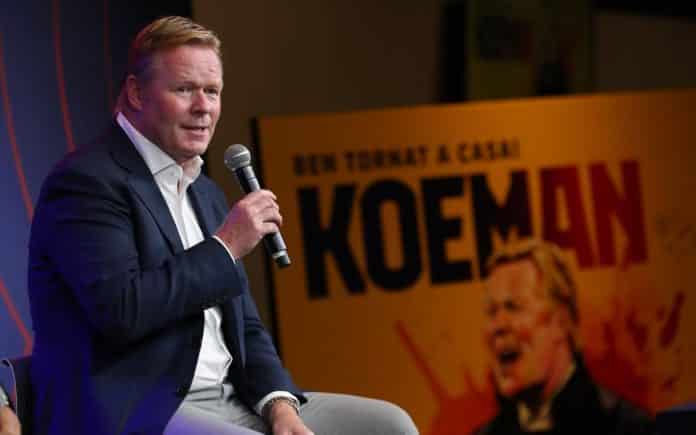 FC Barcelona is facing tough times out there undoubtedly, losing players like Messi, Griezmann and a lot of them did help them financially but left the team broken. The team now mostly relies on youngsters and prospects like Pedri, however, you cannot win big games with them, believes Ronald Koeman.

Now, it has been widely reported for the past few days it has been reported that Koeman has had only three games in hand to prove himself after the humiliating defeat against Bayern Munich.

Then, the match against Granada made it clear that Barcelona is struggling against a team that has never won since they won at Camp Nou back last season. If the last-minute goal by Ronald Araujo wouldn’t have happened then this would be another humiliation at the home ground.

However, in the last 24 hours rumours have been flooding in the Catalan media that Koeman is already on the way to pack his bags as Laporta is ready to replace him. Already the media is circulating the replacement who could take over Koeman and then comes FC Barcelona’s official video where Koeman has said a lot of things.

Now, it is widely been reported that what we think as a gesture of facing the media after the humiliating results recently is the final words of Ronald Koeman as a coach.

Here’s the video released by the club today:

This is the full transcription of his message, thanks to Filip Holub:

“Hello everyone, the club is with me as the coach in a situation of rebuilding. The financial situation of the club is connected to the sporting activities and vice versa. This means that we as a team have to rebuild the football team without being able to make any big financial investments, this needs time.”

“The young talent today could end up being the next big world star in just a few years. In order to reconstruct this team means that young players get opportunities like Xavi and Iniesta had in their day, but we must ask for patience.”

“What’s more, being in a high ranking in the league would be a success. This is a great footballing school for these talents. In the Champions League, we can’t hope for miracles. The defeat to Bayern last week has to be focused from that perspective. “The process that we are in right now, the staff with the team, deserves unconditional support, in word and in actions.”

“I know the press recognize this process. It’s not the first time in FC Barcelona’s history that this has happened. We count on your support in this difficult time. The staff and the players are very happy with the great support from the fans like we had against Granada. Visca el Barca.”

Even though Koeman is repeatedly stating that the situation is not well and as if reconstruction is going, giving excuses, blaming the inability of competing because of young players in the squad. However, young players Gavi, Pedri, Demir are the ones who are playing the best but blaming them and using them as excuses never works when you are at a club as giant as FC Barcelona.

Also, interestingly Ronald Koeman did not take any questions from the press and read the prepared statement, walked away. This in fact is why people are doubting more than ever that this could be Koeman’s farewell message and soon the club could sack him, which is a thing to be seen in the coming hours.

Previous articleFIFA 22: How to download FIFA 22 on PC and play the game on EA Play early access?
Next articleApple aims to cure depression, Anxiety, and Cognitive decline using its smartphones