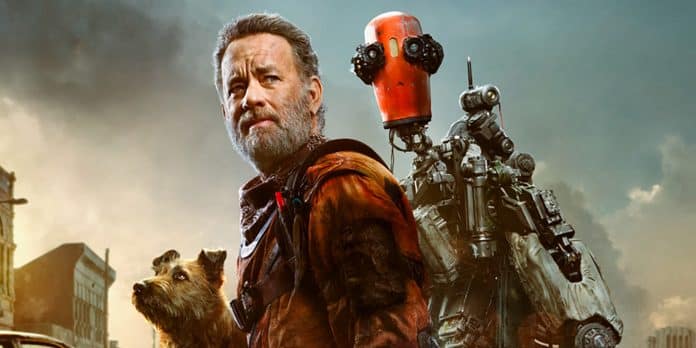 Apple TV+ has unveiled the official trailer of Tom Hack’s sci-fi film starring named ‘Finch’. In this film we will see Tom Hanks is playing the role of a robotics engineer who is surviving an apocalyptic solar flare, then sets out for the mountain trek for safety with his trusted dog and robot sidekick.

The trailer of the film will boost all the requisite emotional buttons, it seems that this film is just like the blend of Cast Away, WALL-E, and Chappie.

It is reported that this film had been announced in 2017, but due to the global pandemic situation the theatrical release of the film has become hold, Universal Pictures has sold the rights of the film to Apple TV, which has changed the title of the film, due to some cautious reason.

The story of the film revolves around a man named Finch who is a robotics engineer, and also one of the survivors of the cataclysmic solar event that has made the world a wasteland. Finch has stayed under the world for a decade and has made his own world that he just has shared with his dog, Goodyear.  Hew become forced to moving as his lab become uninhabitable.

He has made a robot that has been played by Caleb Landry Jones, for watching such Goodyear while he will be no longer can.  It reveals that the trio has embarked on such a perilous journey into the desolate American West, Finch becomes strives to reveal his creation, who has named himself Jeff, the Joy, and becomes wondered about the actual meaning to become alive.

The road trip that they have travelled is full of challenges and humour, which becomes difficult for Finch to goad to Jeff and Goodyear to overcome as it is for him just like managing dangers in this new world.

Previous articleMeet Giancarlo Esposito in the latest trailers of Far Cry 6
Next articleFIFA 22: When can you download the new game and what is its size?

Physical (Season 2): Rose Byrne desires to set up a Fitness Empire to change the Fitness World

“Obi-Wan Kenobi”: The Second Trailer reveals a new Release Date for the series