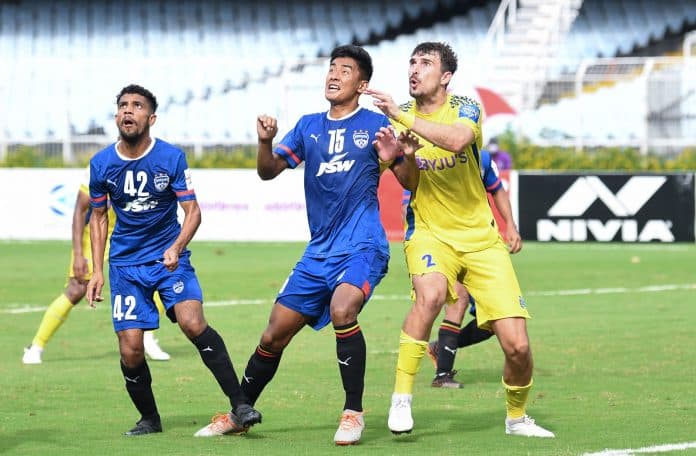 Bengaluru FC (BFC) defeated Kerala Blasters 2-0 in a thrilling all-ISL match at the Vivekananda Yuba Bharati Krirangan (VYBK) in Kolkata on Wednesday, September 15, 2021, to kick off their campaign in style. The team from the southernmost part of India was down to eight players on the field in the end. The Naushad Moosa-coached team’s heroes were Namgyal Bhutia and Leon Augustine, who both scored.

The Kerala Blasters got off to a strong start and dominated the first half. They produced a lot of opportunities, but they didn’t convert any of them. They had their first genuine chance at goal in the 33rd minute, when Sreekuttan’s powerful shot was superbly stopped by Lara. Luna had another chance to score in the 38th minute, this time courtesy of a free-kick, but BFC goalkeeper Lara came to the rescue once more.

The deadlock was broken in the 45th minute when Bengaluru FC’s Namgyal Bhutia took a superb free-kick that found the back of the net, leaving Kerala Blasters’ keeper Albino Gomes with no chance.

It was all downhill from there for the Kerala Blasters, as craziness reigned supreme on the pitch, resulting in three red cards in the match, all in the second half. In the 64th minute, RV Hormipam was the first to leave, followed by Sandeep Singh, and then it was Yendrembam Denechandram Meitei’s turn to leave.

Leon Augustine scored BFC’s second goal in the 71st minute, anticipating a wonderful cross from Harmanpreet and heading it in after Albino stumbled with the initial collection. Lara was named Man of the Match for his superb performance under the BFC bar.

On September 18 and 21, Bengaluru will face Delhi FC and Indian Navy, respectively, with Kerala Blasters’ final group game against Delhi on September 21.