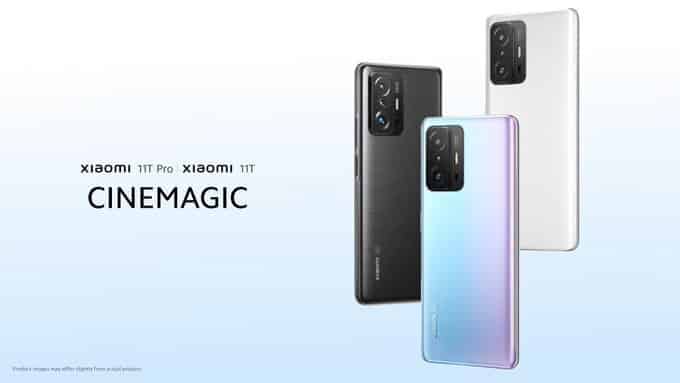 Xiaomi launched the Xiaomi 11T and the Xiaomi 11T Pro at its global event earlier today, the phones come with a punch-hole camera setup and an amazing triple-camera setup. Xiaomi has claimed that these devices have been designed keeping in mind the ‘Cinemagic’ experience in mind, with a list of photo and video features.

The rear camera setup enables up to 8K video recording and ‘end-to-end’ HDR10+ support. There is also a third microphone alongside two standard microphones to enable a feature called Audio Zoom, which captures audio from a long distance.

It also has a side-mounted fingerprint sensor, the phone also comes with dual speakers and has support for Dolby Atmos.

Xiaomi has provided a 5,000mAh battery on the Xiaomi 1T that supports 67W Xiaomi Turbocharging, it charges the device fully in 36 minutes.

The Xiaomi 11T has been priced at EUR 499 or 43,000 INR for the 8GB+128GB variant, it also comes in an 8GB+256GB variant that is priced at EUR 549 or 47,700. It comes in Celestial Blue, Meteorite Gray, and Moonlight White and is available for purchase in Europe. The phone comes with two years of warranty and will get three Android system upgrades and four years of security patches.

The Xiaomi 11T Pro runs on MIUI 12.5 based on Android 11 OS and features a 6.67″ flat 10bit AMOLED true-color display with a 120Hz refresh rate that also supports the company’s AdaptiveSync. The proprietary technology dynamically adjusts the refresh rate as per the on-screen content.

The display is protected by the Corning Gorilla Glass Victus, the best there is, and the device is powered by the Snapdragon 888 SoC along with 12GB of RAM.

The Xiaomi 11T Pro also has the same triple-camera setup on the rear as the Xiaomi 11T, a 108MP+8MP+telemacro shooter setup.

The camera setup also supports up to 8K video recording and HDR10+ support, you also get the Audio Zoom feature for capturing audio from a distance.

The Xiaomi 11T Pro also comes with a 16MP selfie camera sensor. It has up to 256GB of storage, connectivity options range from 5G, Wi-Fi 6, Bluetooth v5.2, GPS/A-GPS, NFC, IR blaster, and a USB Type-C port.

It has dual stereo speakers tuned by Harman Kardon and also has support for Dolby Atmos and Dolby Vision. It also includes a side-mounted fingerprint sensor.

The Xiaomi 11T Pro has a 5,000mAh battery that supports 120W HyperCharge fast charging that will charge the device from 0 to 100 in just 17 minutes.

The Xiaomi 11T Pro also comes in Celestial Blue, Meteorite Gray, and Moonlight White color options and is available for purchase in Europe. It will be eligible for three Android OS upgrades and four years of security patches.

We are not yet certain as to when the devices will release in India.