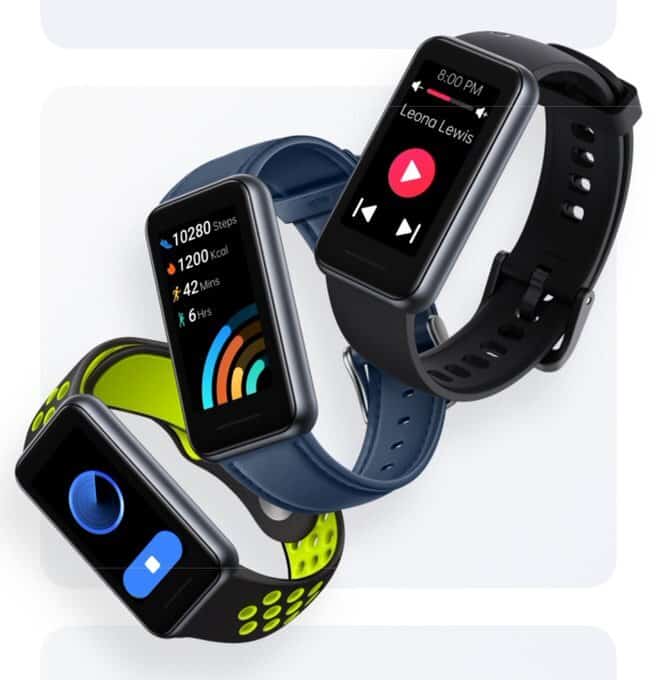 The Realme Band that was announced last March got a successor today as the brand unveiled the realme Band 2 with a bigger screen, bigger battery, and a design reminiscent of the Honor Band 6.

The Realme Band 2 looks more like a smartwatch than a classic fitness band and packs a 1.4″ color touchscreen of 320×167 pixel resolution with a peak brightness of 500 nits, it supports over 50 watch faces, and you will also have the option to create a custom one by uploading a picture from your connected smartphone.

The standard set of health and fitness features we had on the Realme Band are present on Band 2 as well, we get heart rate monitoring, sleep tracking, automatic step counter, reminders to drink water, and a sedentary reminder.

The Band 2 also supports 90 sports modes as opposed to the nine workout modes the first-gen Band came with.

Initially, the Band 2 will track only 14 activities including Yoga, Outdoor/Indoor Walk, Outdoor/Indoor Run, Cricket, Basketball, Swimming, and Football. The support for rest will be added an OTA later.

The realme Band 2 also comes with Smart AIoT Control, a feature we have already seen on realme’s smartwatches, such as the Watch 2 Pro. It allows you to control the company’s AIoT products right from your wrist without having to reach for your smartphone, provided it is linked to the AIoT devices.

The Realme Band 2 works with devices running Android 5.1+ and iOS 11+ and you can manage it with the realme link app.

The wearable app weighs 27.3g and comes in a single Space Gray colorway, you do get multiple options for the straps, one of which appears to be made of leather.

The Realme Band 2 is priced at $40 or 2,940 INR and will go on sale in Malaysia through Lazada starting September 20 with a special launch day price of $35 or 2,572 INR. There is no word on its availability in other markets.

Previous articleLuxury Gadgets on the Market Right Now
Next article“My Brother, My Sister”: All the latest updates about the family drama film