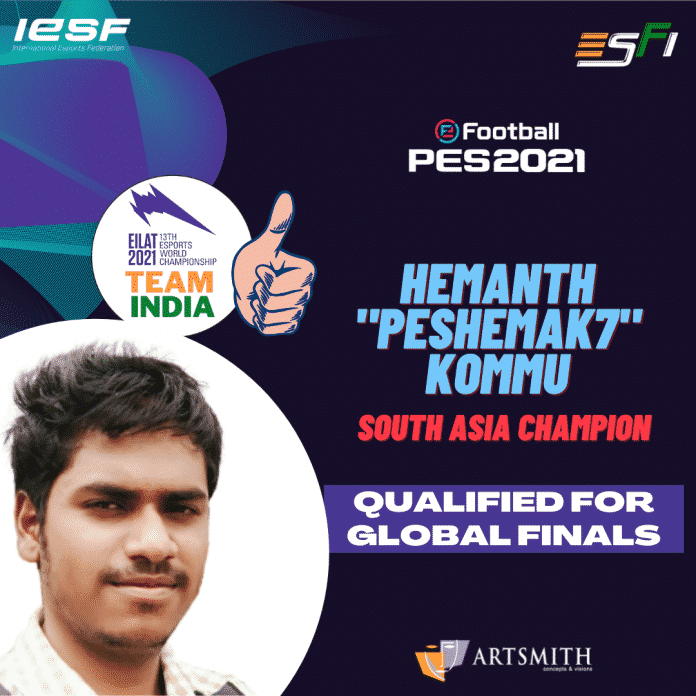 New Delhi, September 14, 2021: The reigning national champion Hemanth Kommu made his way into the Finals of the 13th Esports World Championship after a brilliant performance in the Regional Qualifiers.

With a top-position finish in PES 2021 in the South Asia Region, Hemanth also became the first Indian to seal a spot in the Finals at the ongoing edition of the Esports World Championships.

The Vijayawada resident, who is currently pursuing his Masters from IIT Guwahati, was up against the athletes from Pakistan, United Arab Emirates, Maldives and Sri Lanka in his respective South Asian Region at the Regional Qualifiers which were held online owing to the ongoing Covid-19 pandemic.

The 24-year-old Indian carried his winning form from the recent Nationals into this prestigious event and showed an excellent display of the strategic and skilful game. Hemanth registered convincing victories against his opponents before securing himself a berth in the World Championship Finals, which are scheduled to take place offline in Eilat, Israel from November 14-19.

“It’s a great feeling to represent India in the PES series, the game which I have loved playing since my childhood days. Its sheer dedication and hard work resulted in getting the spot in the Finals of EWC’21 and it allowed me a chance to bring the laurels for the country. The right mentality and proper grind towards the game make everything possible and a sure-shot path to get the success,” elated Hemant aka peshemak7 said after securing the Finals berth at the World Championships.

A five-member Team India CS: GO, comprising captain Ritesh Sarda, Shuvajyoti Chakraborty, Anshul Adardkar, Hrishikesh Shenoy and Harsh Jain, and Tekken 7 player Hitesh Khorwal will be seen in action in the Regional Qualifiers later as they will begin their quest for the place in the World Championship Finals on October 5.

The matches will be streamed live on the International Esports Federation’s official channels.

Esports Federation of India continued its partnership with Artsmith- Concepts & Visions which continues its support as the communication partner for the prestigious World Esports Championships.