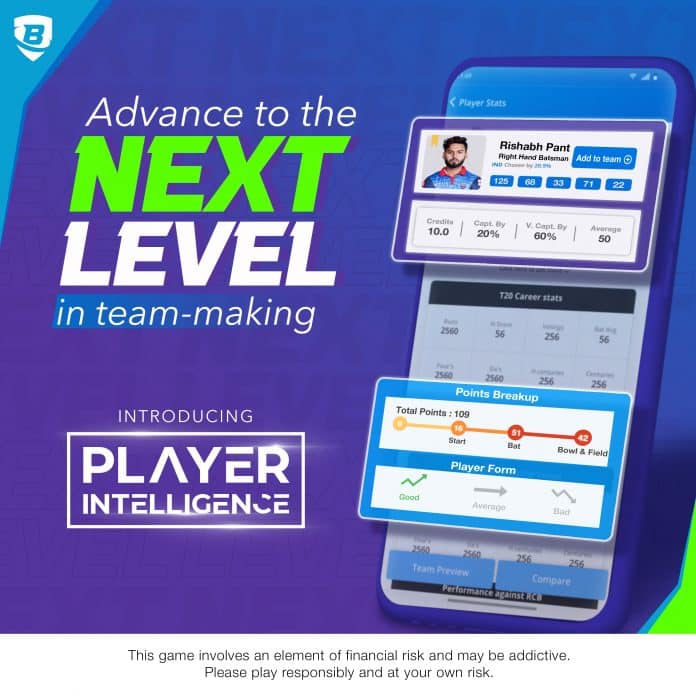 New Delhi, September 14, 2021: BalleBaazi.com, a leading Fantasy Gaming platform from the house of Baazi Games, announced the launch of its one-of-a-kind ‘Player Intelligence’ feature today. Developed by the in-house technology team at BalleBaazi.com, this Made in India feature is a step towards game-changing innovation that will set new benchmarks in the fantasy cricket industry.

The industry-first Player Intelligence feature allows users to have access to a plethora of in-depth information such as venue-specific performance history, fantasy point break-up, players’ form and batting position, alongside a specialization feature that detects the strength of an all-rounder. In addition, it provides extensive insights on topics such as the performance history of players during a particular tournament and against an opponent, average fantasy points and performance compared to other players. The feature all in all is a thorough analysis of each player that enables the BalleBaazi community to make informed and strategic decisions while picking the players in their fantasy cricket team.

Talking about the launch of the new feature, Mr Saurabh Chopra, CEO of BalleBaazi.com said, “From the very outset, our goal has been to provide the best sports gaming experience to our audience. We are extremely happy to share the latest upgrade to the BalleBaazi app with Player Intelligence. We are the first to introduce this analysis-heavy feature in the country that promises to take the player’s experience to the next level. This feature will certainly cater to both pro gamers and new gamers to strategically choose players with in-depth analysis, resulting in a seamless gaming experience. We’re optimistic that this innovative feature will set new benchmarks in the fantasy sports industry.”

Adding on he said, “As a 100% indigenous online gaming organization, we aim to help our users be a pro player in the segment. With the launch of Player Intelligence, we take immense pride in educating our users on how to make a strong and effective fantasy team.”

BalleBaazi.com has created waves around the fantasy gaming industry by providing the best possible experience and a level playing field for enthusiasts alike. With the addition of the Player Intelligence Feature, BalleBaazi aims to get one more step closer to making the fantasy sport more interactive for its fans and transforming their participation from passive to active one.

2011 World Cup Hero, Zaheer Khan Roped in as the Brand Ambassador of BalleBaazi.com

Saurabh Chopra, the CEO of BalleBaazi.com says, with Player Intelligence feature they want to make BalleBaazi a one-stop solution for player analysis