Tecno Spark 8 launched with a 5,000mAh battery, and 16MP dual-camera setup in India 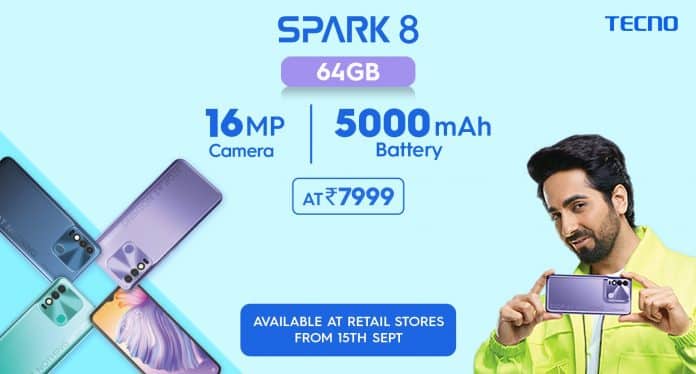 Tecno announced the Spark 8 smartphone by the end of August in Nigeria. Today the device has finally been launched in the Indian market. In comparison to the Spark 7, the newly announced Spark 8 offers a better rear camera and improved design.

The Spark 8 is powered by the MediaTek Helio A25 SoC, it comes with 2GB of RAM and internal storage space of 64GB. The device runs on Android 11 Go Edition and HiOS 7.6 UI, which makes an appearance along with Super Boost system optimization.

The Tecno Spark 8 is backed by a 5,000mAh battery with support for 10W charging. It has an 8MP sensor in the front with an f/2.0 aperture, along with a dual-LED flash.

A uniquely designed square-shaped module can be seen on the back panel of the device, apart from this, it houses a 16MP primary sensor, an AI lens, and a quad-LED flash unit.

It also packs in a fingerprint scanner. The handset offers other features such as dual SIM support, 4G VoLTE, Wi-Fi, Bluetooth, GPS, a micro-USB port, a microSD card slot, and a 3.5mm audio jack.

Coming to the pricing of the Tecno Spark 8, comes with a price tag of 7,999 INR in India. It comes in three colors such as Iris Purple, Atlantic Blue, and Turquoise Cyan.

It will be available for purchase via retail outlets from September 15th in the country.

Previous articleISL 2021-22: Here’s the official schedule of the first 11 rounds of the Indian Super League
Next articleHere’s the list of all the football players who have scored more than 100 Premier League goals