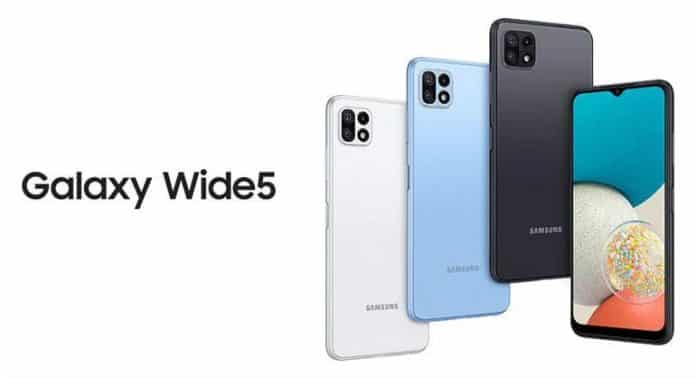 Samsung and SK Telecom have unveiled the Galaxy Wide5 smartphone in South Korea, it is a budget-friendly 5G phone that offers features such as a big display, a triple camera setup with a 64MP primary sensor, and a good amount of internal storage along with a big battery.

The Samsung Galaxy Wide5, model number SM-E426S has a 6.6″ display that offers a Full HD+ resolution, the device has an Infinity-V notch on the display.

Embedded into the notch is an 8MP front selfie shooter. Its rear camera setup as mentioned above has a 64MP primary sensor, a 5MP ultrawide lens with a 115-degree FOV, and a 2MP depth assist lens.

The Galaxy Wide5 is powered by the MediaTek Dimensity 700 SoC and ships with 6GB+128GB of storage. It also comes with a microSD card slot. It runs on Android 11 OS out-of-the-box.

The device features a 5,000mAh battery along with support for 15W fast charging. It comes with a side-mounted fingerprint scanner and measures 167.2 x 76.4 x 9mm and weighs 203g.

The smartphone is available for purchase through online and offline stores of SK telecom beginning from today.

Prior to the launch of the Wide5, it was speculated that it could be rebranded version of the Galaxy A22 5G. As can be seen, the Wide5 differs from the A22 5G in departments like the main camera and rear design.

Samsung is expected to soon announce the Galaxy F42 5G (model SM-E426B-DS) in India, since the F42 5G’s model number is similar to the Wide5, it appears as though the F42 5G could be a rebadged edition of the Wide5.

Previous articleMivi DuoPods F30 is now live to grab at Rs.999 only
Next articleVivo X70, Vivo X70 Pro, and Vivo X70 Pro+: Everything you need to know about this flagship series