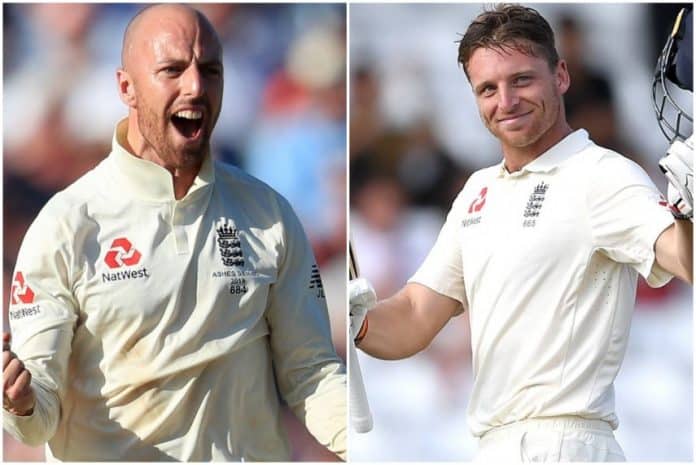 England have decided to call up two players for the fifth test match against India. With the series hanging by a thread after suffering a 157 run defeat against India in the fourth test, the English Cricket Board have recalled Jos Buttler and Jack Leach to bolster their squad.

The wicket-keeper batsmen who missed the fourth test after taking paternity leave will return for the final test match against India. Sam Billings who was a part of the squad in the fourth test will make way for Buttler as he will go back to Kent.

On the other hand, Jack Leach might be in line to start the fifth test after making his way back into the squad. The main reason for Leach’s inclusion is because the English pace battery was toothless in the second innings of the fourth test. As a result, the left arm spinner can bring a fresh change in the bowling attack.

Meanwhile, Craig Overton suffered a blow to his elbow while batting in the second innings of the fourth test. Therefore there are doubts regarding his inclusion in the final 11 in the fifth test. As a consequence, England could go with two spinners Moeen Ali and Jack Leach in Manchester.

Also Read: Ind vs Eng: India come from behind to record a Fantastic Win in the Fourth Test against England

English cricket fans will have a breather as Mark Wood will be in contention to start the fifth test against India. Wood who was injured at the end of the third test has made his comeback into the squad and has started bowling in the nets once again. England head coach Chris Silverwood has confirmed that Mark Wood will possibly make the playing 11 for the fifth test against India.

We have got some aching bodies, I’m not going to deny that,” Silverwood said. “So we obviously have to keep an eye on that. He could come back and if he does, he will obviously add that pace for us. If the pitch is abrasive as it usually is at Old Trafford there should be reverse swing.”

Silverwood also gave an update regarding James Anderson’s chances of playing the fifth test. The Right arm fast bowler has been the second highest wicket taker for England. However, Anderson looks very tired after not getting any rest during the entire series.

It’ll be a discussion that he and I will have together,” Silverwood said. “He will have input into that, without a shadow of a doubt. James knows his own body. He will certainly give me an honest opinion of where he is at, and it’s certainly something I will listen to.

“I know what it’s like, he won’t want to miss any cricket. We have to make sure we look after him. Although there is a gap between the final Test and what’s in front of him, he’s certainly someone I want to make sure is looked after.”

England is trailing 2-1 going into the final test and as a result, it is highly unlikely that they will rest their premier bowler in a high stakes match against India.

England has scored the highest ODI total of 498/4; Check out the top 5 highest ODI scores