Franck Ribery has been officially presented as the new Salernitana player 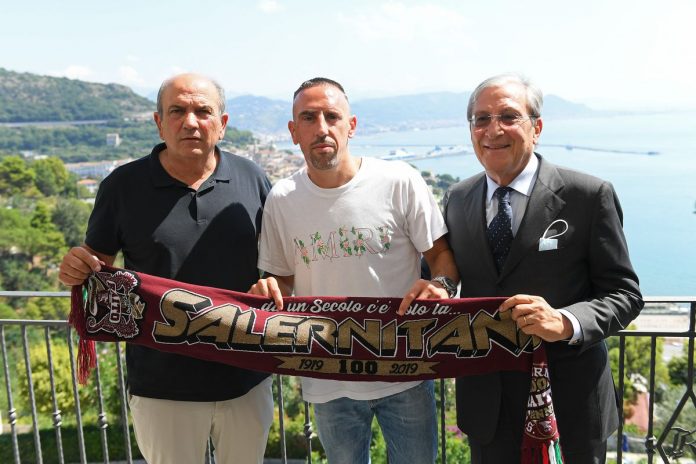 Bayern Munich legend Franck Ribery has joined his new club in Serie A, Salernitana. It was already revealed that the Frenchman will join the Serie A side. Now, Ribery has been officially presented as the new Salernitana player. He will wear the No 7 shirt at his new club.

Franck Ribery said during his official presentation: “Good evening everyone, I’m very happy to be with you, my new team and with the new coach.”

“We all have one goal, to stay up. I will give my best for all of you, for the club and for the team. Thank you, all.”

“The team is the most important thing, and I must be able to help the younger players.”

“Negotiations didn’t take long, I spoke to sporting director Fabiani in a video conference and he transmitted all his motivation. I felt the fans’ love even before arriving.”

“I am feeling well, but I am not here to have fun. I still have a lot to prove. Serie A is a difficult league and I’ll need to give my best. It’s easy to train alone, but it’s not as easy to train with the team, I’ll try to get fit as soon as possible.”

“I live for football, had I lived for money, I wouldn’t be here.”

“My family was vital for my choice, I had to explain my decision and it was not easy to tell my children that dad had to leave again. I had to talk to them because I could not decide on my own.”

“I already feel at home, it’s like I’ve been here for two or three years already. Now I must prove my worth and help the team.”

Serie A club Salernitana to complete the signing of Franck Ribery