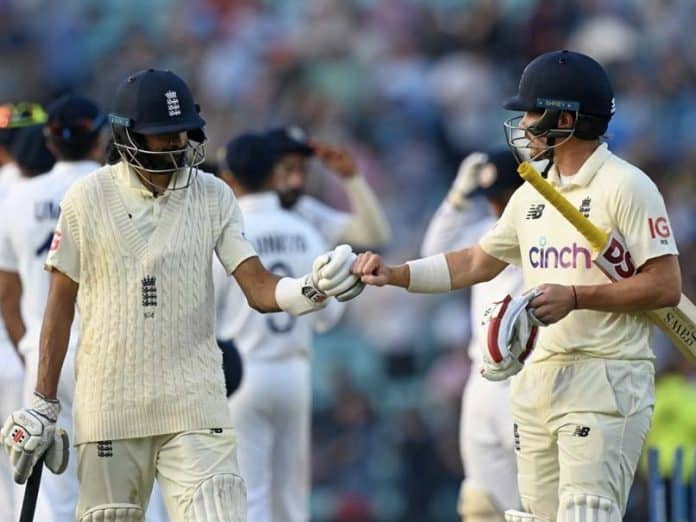 Virat Kohli and Jadeja walked in to bat on day four with India leading by 171 runs. With the pitch flattening, it was anticipated that India would face very few difficulties to bat against England. After the play began, Kohli and Jadeja played the initial 10 overs of the day cautiously.

However, Woakes broke this threatening partnership by trapping Jadeja in front of the stumps while he was batting on 17. Few overs later Chris Woakes struck gold as he took the wicket of out of form Ajinkya Rahane for nought.

England’s great start continued as Virat Kohli edged one off Moeen Ali for 44. Hence just when it looked as if the Indian captain would score big, he was sent to the pavilion. Following the dismissal of Kohli, Shardul Thakur who was the hero of the first innings came in to bat for India.

Continuing on his excellent first innings score, Thakur built a partnership with Pant and started playing some aggressive shots. After lunch, the pair switched gears and played beautifully. Subsequently, Thakur and Pant scored their respective half centuries to take the Indian lead above 300.

Although a change in bowling worked wonders for England as Root dismissed Shardul for 60 first. In the next over Moeen Ali took the wicket of Rishabh Pant for 50. However, the English bowlers could not take an advantage from these twin dismissals.

Because Bumrah and Umesh Yadav played quickfire cameos and added some valuable runs to stretch the lead to 350. In the end, Overton and Woakes cleaned up the tail and England had to chase a massive total of 368.

England required a good opening partnership from Haseeb Hameed and Rory Burns to put the Indian bowlers on backfoot. The opening pair set the tone as they played the bowling of Bumrah and Umesh Yadav without any difficulties.

Following the opening spell, Burns and Hameed started scoring easily as the Indian bowlers were not able to reap any kind of advantage from this flat wicket similar to what the English bowlers faced during India’s second innings. The openers ensured that they don’t lose their wickets in the final sessiom and played with a positive intent.

At the end of day four’s play England finished with 77 runs without losing a wicket. Haseeb Hameed is batting on 43 and Rory Burns is playing at 33. As a result, England requires 291 runs on the final day of the fourth test against India. Hence, fans can expect a draw unless India manages to get early breakthroughs and dominate tomorrow’s play. All three results are possible and it would be interesting to watch the proceedings on day five.

Previous articlePremier League: No 7 Jersey of Cristiano Ronaldo breaks all the sales records of Manchester United
Next articleVivo X70 Series can feature the Vivo V1 chip