“The Umbrella Academy (Season 3)”: All the latest Filming Updates and Expectations 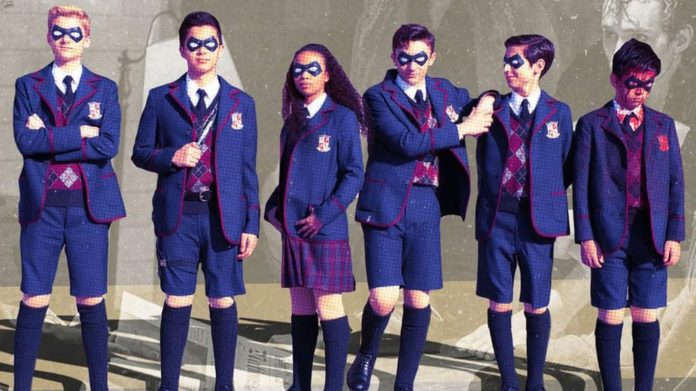 Last year this time the second season of The Umbrella Academy was released and the third season 3 has been completed the shooting within September. This series is an upcoming Netflix Original comedy-drama series that has been created by Steve Blackman and it revolves around the comics of that exact name by Gerard Way and Gabriel Ba.

In this all the superhero element has been gripped all the viewers across the world to be the good part of the decade, it has provided something more special just like The Umbrella Academy for adding some much needed fresh category.

On 31st July 2020, the second season of the series was released and it has scored 4 Emmy nominations that have been included with such incredible cinematography, best fantasy, sci-fi costumes, and sound editing, and also has visual effects.

Now, The Umbrella Academy is one of the most popular Netflix Original superhero comedy-drama series which is created by Steve Blackman. The story of this series revolves around the original comics of the same name by Gerard Way and Gabriel Ba.

It has been seen that this popular superhero series has controlled the entire audience across the world for the better story of a decade. This series has been taken something special and added some required freshness to the category.

As this series is very popular among the subscribers so it is not wondering that The Umbrella Academy is coming for the third season. There is no doubt that it is one of the best Netflix Originals renewed in 2020.

The filming of this series has been scheduled to start in February. It is expected that The Umbrella Academy will return in the Spring or Summer of 2022.

The Umbrella Academy(Season 3): All Titles

The writer and the showrunner of this series Steve Blackman reveal the episode titles of the third season.

Last time the season 2 of the series exploit huge bombshells and has left a lot of questions for the third season.

What will happen with The Sparrow Academy?

It is assuming that based on their return to the future, The Umbrella Academy has discovered some of the consequences of their work in the past. After Sir Reginald becomes well and alive, he gives a shocking statement about the existence of The Sparrow Academy. On the second floor of the library, five figures and a green glowing cube has been found before The Umbrella Academy that is the most shocking reveal of them all to appear. Ben Hargreeves is also alive and well but he has no idea about those “assholes”.

With the little idea about their birth in 1989 and also to avoid making the same mistakes, Sir Reginald has adopted different children. Ben was also adopted as his identity has not revealed at the events of “A Light Supper”.

It is also informed that in this new timeline Ben will be the new Number One.

What about Grown-Up Harlen

At the end of the season, it has seen that her powers have been removed and after that, it was revealed that the teenage boy can possess telekinetic abilities.

In the year 2019, she would turn 64 years old so that he will acquire decades of experience with his amazing telekinetic abilities. It seems that he would forget about Vanya and the remaining of The Umbrella Academy at that time.

Now it is unclear that he will be the next villain or an ally to The Umbrella Academy.

In the entire series, Lila Pitts has seen to be the most powerful individual so far. Last time it was seen that Lila escaped using one of The Commission’s briefcases for an unknown time period. At last, Lila found out the truth behind the death of her parents so it is expected that next time we will see her and she will be trying to save their lives. As she has gone through a fragile state of mind so she has to be very careful about her actions either could have some disastrous consequences.

If she cannot resist Five and The Handler from the killing of her parents then this may cause the existence of the new Handler.

It is also expected that Lila will try to connect herself with her lover Diego.

As Sir Reginald has chosen some other children for adaptation over the original; members of The  Umbrella Academy so it indicates that the new timeline could be the alternative versions of the Hargreeves children.

As Vanya was born in Russia so if Sir Reginald does not remove her from the country, her incredible and most destructive powers would be in the hands of the Kremlin. It is just like lighting up the stage of the world with her violin prowess.

It is expected that it would be very funny to see the alternative versions of The Hargreeves.

As Elliot Page has come out as trans-man, so the fans become wondered but Netflix has given the confirmation of portraying the role of Vanya Hargreeves.

In January 2021 the official castings for the Sparrow Family have been revealed. It is included with

1. Justin Cornwell as Marcus, who is a natural-born leader with huge confidence and who keeps the entire family together.

2. Justin H. Min as Ben, is a scheming, tactical, and vicious person to determine his status as a leader.

3. Britne Oldford as FEI, who has especially seen the world. He is one of the smartest people in the room.

4. Jake Epstein as Alphonso is a scared crime-fighter with little caustic and some sense of humor who can enjoy the verbally berating of his enemies.

5. Genesis Rodriguez as Sloane who is known to be a romantic dreamer wants to see the entire world beyond the academy.

6. Cazzie David as Jayme who is a loner having a fear-inducing snarl.

7. Existential Dread Inducing Psykronium Cube as Christopher It is mainly a telekinetic cube that has the ability to freezing the room cold and also induce paralyzing fear without much warning.

The filming of the third season of this series was started at beginning of February 2021. All the team was taking the preparation to begin the filming from early October 2020. It has been reported that the shooting starts on 7th February 2021. As it takes some months to finish so it is expected to end on 17th August 2021.

Justin H Min first time tweeted the first look of the Sparrow Academy on 31st January by donned the tracksuits with the Sparrow logo. In an interview, Steve Blackman said that they know that it takes 18 months to produce each of the seasons of The Umbrella Academy.

It is informed that the filming of the series is still continuing in July 2021 with some excellent snaps and videos of them and the filming is contained with the one embedded below of them shooting on Court Street.

It has been confirmed on 1st September 2021, all The Umbrella Academy cast has revealed about the wrapping up of the third season of the filming.

The Umbrella Academy(Season 3): Third Season is the last or not

There is sad news for the fans of The Umbrella Academy that Netflix has canceled the shows before they make it for the fourth season. It is assuming that they will also stop the story in the third season.

The comic co-creator give an 18-page documentary to the showrunner Steve Blackman. It has been informed that the fourth season is developing actively and also on the way to be renewed.