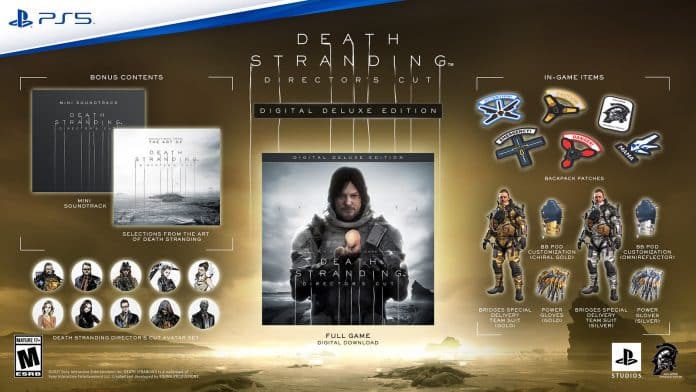 During Geoff Keigley’s Summer Game Fest in June, we got the announcement of the upcoming Director’s cut version of the amazing Death Stranding.

We got to see the extended look of the Director’s Cut, and it that Kojima Productions shared new delivery tools, like a cargo launcher, and boots that decrease fall damage.

We also saw Buddy Bot and this time we got to see it in more detail. For those who don’t know this is a new feature that lets Sam Porter Bridges carry more cargo. We are also getting a firing range that allows players to practice with weapons — and “train and compete” for high scores.

The director’s cut will also bring along with its new “action-packed” delivery missions and in the clip released from the game, we got to see Sam Porter Bridges heading deep into what appears to be a subterranean facility.

Things just don’t end here and Death Stranding: Director’s Cut will also include new songs for Sam Porter Bridges to dance to in his room. Players can now do stunts and tricks, race on a race track, on the motorbike, and other vehicles as well.

The latest version of Death Stranding, which is the Death Stranding: Director’s Cut, even though Kojima doesn’t like the title, will launch on PlayStation 5 on Sept. 24.

there are many more changes coming to the game apart from what is mentioned above, and most of them are focused on combat. The new version will also bring about additional tools to help Sam Porter Bridges be a more effective delivery man.

Death Stranding is an action game developed by Kojima Productions. It is the first game by director Hideo Kojima and Kojima Productions after their split from Konami in 2015. It was released by Sony Interactive Entertainment for the PlayStation 4 in November 2019 and by 505 Games for Windows in July 2020.

Seven most popular games from the Sony’s State of Play