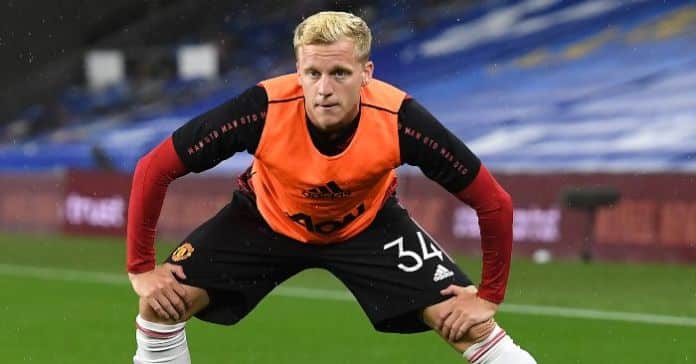 Donny Van de Beek has mainly been seen on the bench for Manchester United since making an ambitious £35 million move from Ajax to Old Trafford last year.

Everton were trying to sign the midfielder on a loan deal late in the transfer window, but their approach was rejected by the club since they believe that Van de Beek is in the plans of Ole Gunnar Solskjær. However, so far, he is yet to play an important role in the team since players like Scott McTominay, Bruno Fernandes, Fred and Paul Pogba start ahead of him every week.

Van de Beek’s agent Guido Albers confirmed: ‘There was interest from Italy, Germany, England… so that looked good but you need the co-operation of the club but they didn’t. Disappointing but also reassuring for him.

‘He’s been promised that before but we came to a clear agreement about this with the club so we have all faith that will happen now.

‘Is he happy or disappointed? I won’t say but everybody who knows Donny knows he loves the game and he wants to be on the pitch every week.

‘So from this answer you can probably tell what he wanted most.’

United have shown a lack of creativity at times, and Van de Beek could be the solution to that problem since he was one of the main attacking midfield talents with Ajax. The season is long, and we could yet see Solskjær turn to the Dutchman in due course of the campaign.