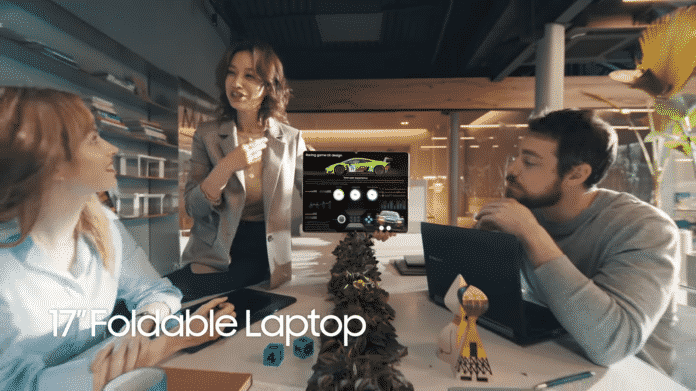 At the Korea Display Exhibition (IMID 2021), the South Korean tech giant, Samsung showcases their new foldable devices that included a sizeable foldable laptop. During the official press release, Samsung Display referred to the laptop as the Flex Note, while confirming that it had a 17.3-inch display when unfolded with a 4:3 aspect ratio.

According to the latest sources, @UniverseIce has revealed a new Samsung model name, the Galaxy Book Fold 17. However, the leaker has not yet elaborated on the image mentioned in his leak which gives the devices name, however, the name appears to be Flex Note that Samsung exhibited last week.

Further reports also state that Samsung first teased the Galaxy Book Fold 17 in May during a short SID 2021 video and the during the video there was a small section that displayed the device. However, the section on the Galaxy Book Fold 17 lasts only a little more than 20 seconds, but it confirms a few aspects about the machine.

From what we can make out so far, it’s speculated that the Galaxy Book Fold 17 will have an Under Panel Camera (UPC). The UPC is a technology that Samsung debuted on the Galaxy Z Fold 3. and the same teaser also describes that the laptop supports ‘OLED Sync’ and ‘Seamless motion speed’, and these both will work on low image blur and moving picture response times (MPRT).

The timing of this could coincide with the launch of the Galaxy S22 series, which is expected to arrive in January. For more information stay tuned.