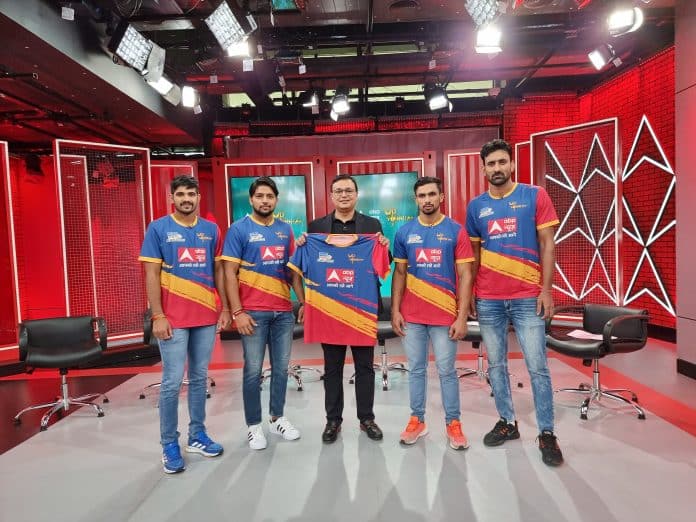 September 1, 2021: As the Pro Kabaddi League is all set to make its return, ABP News has signed a deal to become the principal sponsor of the UP Yoddha team for the 2021-22 season. Just like the previous seasons, the league has seen phenomenal sponsorship interests at both league level and team level, making this an even more exciting partnership for both parties. As a part of this deal, ABP News’ logo will feature prominently on the UP Yoddha players’ jerseys, allowing the news channel to build brand recognition amongst younger audiences and sports aficionados across the country.

This association is also crucial as it comes at a time when the state of UP will be heading into polls, which creates its own buzz around activities associated with the state. Giving a boost to the partnership is the recent announcement of the acquisition of the star player of the league- Pradeep Narwal, by UP Yoddha.

Considering the popularity of the league and the excitement towards the new season, this partnership will help ABP News connect with a wider audience by capturing the interest of both rural and urban markets. It will draw in new users to ABP’s fold and help showcase the brand amongst sports consumers across various states. This partnership will help in promoting positive and encouraging image of ABP News. Since there is a wide variety of viewership demographics, this sponsorship will help in garnering more opportunities for ABP in the future. Furthermore, this sports sponsorship is worthwhile for the brand because of the massive audience they are going to reach, resulting in relatively high return of investment.

Speaking on the announcement, Mr. Avinash Pandey, CEO, ABP Network said, “We are extremely excited to be supporting UP Yoddha, one of the most promising teams in Pro Kabaddi League this season. Kabaddi, as a sport, has grown significantly over the years. The Pro Kabaddi league has popularized the Indian-origin sport even more and has created a strong connection with sports lovers and younger audiences. Alongside UP Yoddha, we hope to make this season of Pro Kabaddi an incredibly engaging, memorable, and entertaining spectacle.”

Speaking about the partnership, Col. Vinod Bisht, CEO, GMR League Games said, “At UP Yoddha, we are excited to have ABP News as our Principal Sponsor. ABP Network is one of the most reputed and far-reaching media houses in the country. We believe that with the help of this partnership we will drive great support for the franchise UP Yoddha, which holds the flag high being the first team out of UP in any league sport in the country. ABP News is the leader in Hindi news Genre and the partnership gives us the opportunity to undertake joint initiatives and promote the sport in the state at the ground level. We hope this is going to be the start of a long and mutually rewarding partnership between two big organisations.”