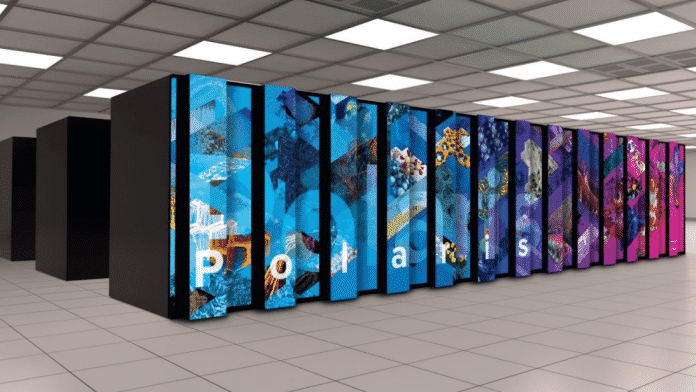 We did know about US Department of Energy’s Argonne National Laboratory and Hewlett Packard Enterprise collaborating to make one of the fastest Supercomputers out there. Its new Polaris Supercomputer will use Nvidia’s A100 GPUs paired with AMD’s EPYC CPUs.

It delivers 4X faster performance than Argonne’s current supercomputers and will be hosted and managed by the Argonne Leadership Computing Facility (ALCF), a U.S. DOE Office of Science User Facility.

Polaris is built by Hewlett Packard Enterprise (HPE), will use 2nd Gen EPYC processors and then upgrade to 3rd Gen AMD EPYC processors, and will allow scientists and developers to test and optimize software codes and applications to tackle a range of AI, engineering, and scientific projects.

Coming to the supercomputer, Polaris, it will employ four Nvidia A100s and two AMD CPUs per node. This will be a total of 2,240 Nvidia GPUs spread across 560 nodes helping Polaris to deliver up to 44 PetaFLOPS of FP64 performance.

“Polaris is well equipped to help move the ALCF into the exascale era of computational science by accelerating the application of AI capabilities to the growing data and simulation demands of our users,” said Michael E. Papka, director at the Argonne Leadership Computing Facility (ALCF). “Beyond getting us ready for Aurora, Polaris will further provide a platform to experiment with the integration of supercomputers and large-scale experiment facilities, like the Advanced Photon Source, making HPC available to more scientific communities. Polaris will also provide a broader opportunity to help prototype and test the integration of HPC with real-time experiments and sensor networks.”

“AMD EPYC server processors continue to be the leading choice for modern HPC research, delivering the performance and capabilities needed to help solve the complex problems that pre-exascale and exascale computing will address,” said Forrest Norrod, senior vice president and general manager, Datacenter and Embedded Solutions Business Group, AMD. “We are extremely proud to support Argonne National Laboratory and their critical research into areas including low carbon technologies, medical research, astronomy, solar power and more as we draw closer to the exascale era.”

Polaris will use the AMD EPYC 7532 and EPYC 7543 processors, and NVIDIA A100 Tensor Core GPUs, to deliver approximately 44 petaflops of peak double precision performance, which is 4x faster than Argonne’s current supercomputers.

Initially, Polaris will be used by research teams participating in initiatives such as the DOE’s Exascale Computing Project and the ALCF’s Early Science Program. User communities within the DOE’s Exascale Computing Project will also use Polaris for optimizing engineering tasks for Argonne’s forthcoming exascale supercomputer, which includes scaling of combined CPU and GPU-enabled systems and the integration of workflows combining modeling, simulation, AI and other data-intensive components.

Polaris is scheduled to be delivered and installed in August 2021 and will go into use starting early 2022. The broader HPC community will access the system in spring of 2022 to prepare workloads for the next generation of DOE’s HPC resources.

- Advertisement -
Powered by JustWatch
Share
Facebook
Twitter
Pinterest
WhatsApp
Linkedin
Previous articleIndia’s biggest poker tournament is back! This October, witness the return of EndBoss on PokerBaazi
Next article“Annabelle Rathore”: All the latest updates about the horror-comedy film