Firefly Lane Season 2: All details about the renewal status, production status, expected release date, and expectations from the upcoming season 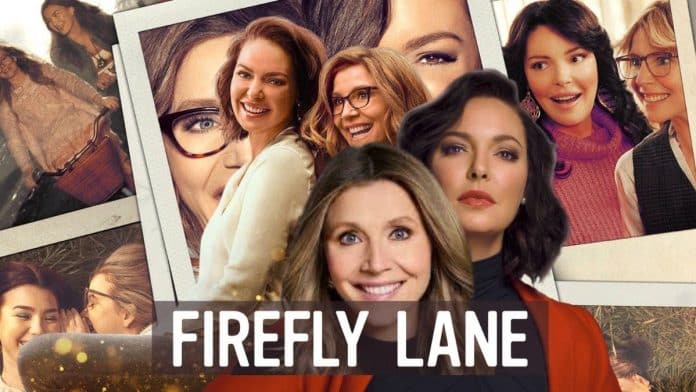 Firefly Lane is a series that is based on the popular novel by US author, Kristin Hannah. The series is about the moving story of two best friends and the obstacles they face in their lives and their friendship.

The series was released on Wednesday i.e. 3rd February. It has gained mixed critical reviews. Audiences seem to have taken to it far kinder with it currently carrying a 7.5/10 as of July 1st, 2021.

Firefly is all set for its second instalment as it was confirmed in May 2021. It has come to know that now the series has entered the pre-production period with the filming due to start at the end of August 2021.

So with all that said, here’s everything we know about the future of Firefly Lane on Netflix.

It has obviously taken a few months but finally, Netflix has made the official announcement that firefly Lane is returning with its second instalment.

The announcement was made through their social media platforms and YouTube, where they had actresses Katherine Heigel and Sarah Chalke answer fan questions, and make the official announcement.

The season of the series does not cover all the plot and aspects from the novel, so there is still much of Tully and Kate’s story left to tell. There also lies a sequel of the novel named Fly Away, which will further extend the story.

Maggie Friedman has been confirmed to be returning as showrunner for season 2. Michael Spiller (Modern Family, Scrubs) is going to direct season 2.

The filming of the Firefly Lane season 2 once again will be taking place in Vancouver, Canada.

According to ProductionWeekly, we have come to know that season 2 is currently due to kick-off filming on 30th August and run through to 20th April.

Other sources have given a broad summer 2021 film start so either way. In the next couple of months, we can hope to start hearing from the cast returning to set.

Katherine Heigl has Tweeted on August 24th to confirm that she was back in Vancouver to film season 2 of Firefly Lane.

At the end of season 1, we have seen that two very contrasting images of Tully and Kates’s relationship were left. The pair have enjoyed a cozy catch-up by the firepit after Tully has quit her show. There Tully has promised Kate that she would help her to find a new job when she would be hired again. After that, the audiences were flashforward to a future scene, where the pair have an emotional confrontation at a funeral, with Kate stating that she never wants to see Tully again.

There lies no doubt that season 2 will definitely explain what will happen to fracture Tully and Kate’s relationship so irreparably. Although this series is all about friendship, we can’t believe that these two won’t make up in the end.

Finally, the controversial finale took place at a funeral, it is not obvious whose funeral it is. As Tully attends the funeral in order to pay respect, we can clearly guess that the funeral was of someone closest to Kate. We can only guess that whose funeral it was and we have two names in mind among them it can be one of its funerals. The names that came to mind are Kate’s ex-husband, Johnny, who left for Iraq, and Kate’s elderly father. A potential second season is expected to cover the impact this has on Kate, as well as her teenage daughter, Marah.

It is also expected that season 2 will explore what will happen next with Tully’s career, including if she ever offers Kate that job.

As Firefly Lane is based on a fairly famous novel, we don’t have to search too hard to find out what actually happens next to Tully and Kate.

It is a wild guess based on the production schedules is that the series Firefly Lane season is expected to in mid-to-late 2022. It is assuming of course that production does not get interrupted.

Katherine Heigl has also confirmed a 2022 release date in a response to a fan:

HBO confirms the renewal of the series “Succession”