Cobra Kai Season 5: All details about the renewal status and expected release date 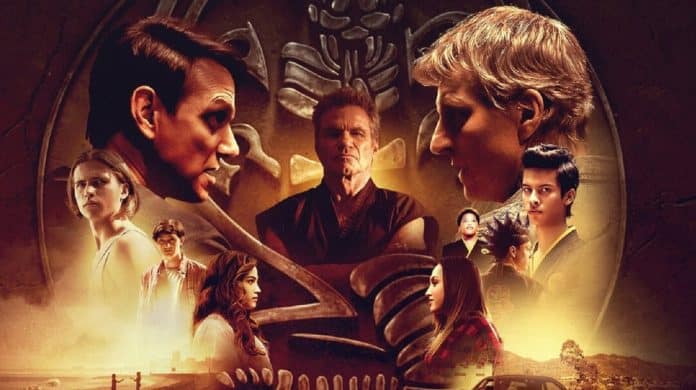 Cobra Kai is an American martial art comedy-drama TV series. The series is based on an original sequel named The Karate Kid by Robert Mark Kamen. It is created by Josh Heald, Jon Hurwitz, and Hayden Schlossberg. It is produced by Kartin L. Goodson and Bob Wilson. Its production companies are Hurwitz & Schlossberg Productions (season 1 & 2), Overbrook Entertainment (season 1-2), Heald Productions (season 2), Counterbalance Entertainment (season 3), Westbrook Studios (season 3), and Sony Pictures Television Studios. It contains 4 seasons out of which the fourth one is on its way to get released. It contains 40 episodes including the fourth season.

It is a story about two middle-aged people named Daniel LaRusso and Johnny Lawrence who find themselves martial-arts rivals again, decades after their 1984 All Valley Karate Tournament bout.

From its humble beginning on Youtube premium, Cobra Kai sets amongst the biggest titles in the Netflix Original lineup. The show is nominated in Emmy 2021 for best comedy series.

This year, the series was nominated for best comedy series at the Emmys. Beyond doing the numbers for Netflix  (45,000,000 reportedly watched season 3 on Netflix in the first 28 days) the show has also been an unlikely awards magnet for the streamer.

The renewal of season 5 comes ahead of season 4, on which the work has been started for a while now. Manifest Season 3 was landed on Netflix on 1st January 2021, after originally thought to be released in summer 2020.

Nothing more has been revealed till now, only a date of December 2021 release date has been revealed for Season 4 and a short teaser. More is expected to be announced for Cobra Kai season 4 at Netflix’s “Tadum” event on September 25th.

Other than Lucifer, Cobra Kai has been one of the best continuations or revivals in Netflix’s history.

Netflix originally picked up the show after two seasons on YouTube Premium (where the show continues to also reside). We’re told by insiders that the Netflix acquisition of the show was a “no brainer”.

On Twitter account, the news was broken about season 5 by the Cobra Kai s at 12:15 PM EST referring to its updated bio which states:-

They followed up seconds later with a teaser

Till now, Netflix did not reveal the release dates but the production schedule was quite similar to that of season 4, so we can expect that season 5 by the end of 2022.

We’ll have a full preview for season 5 of Cobra Kai soon after season 4 releases which again, has yet to be given a full date in December 2021 although it’ll likely be a Friday release.

Cobra Kai(Season 5): All the Latest Updates We Know about the series