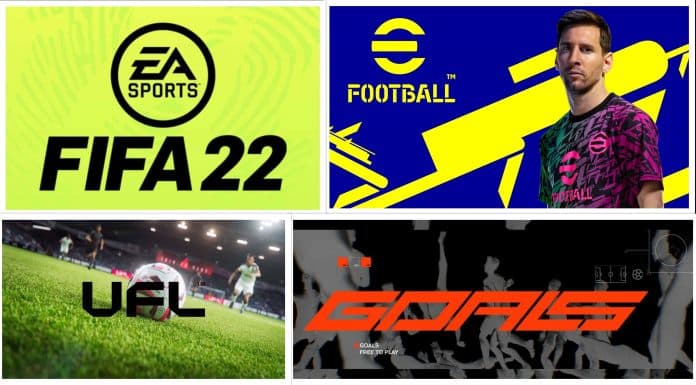 However, things are probably going to change now as there are 3 potential upcoming football games that could stand a chance in front of FIFA if they are implemented well.

So, here we take a look at the best upcoming football games that will compete with EA Sports’ FIFA:

The makers of Pro Evolution Soccer (PES), Konami has now turned their head to eFootball. They are trying to bring a free-to-play football game and it will also have a cross-platform feature as well to help players play with each other irrespective of their consoles or PC.

According to the developers, Konami will be implementing a new technology called Motion Matching, which will select the most accurate motion of a player in real-time from the vast range of motions that real players can make.

This prospect of a free-to-play cross-platform football game seems to have caught the attention of everybody including their biggest rivals EA Sports’ FIFA and it has been heard FIFA 22 is the last FIFA instalment which will be paid. EA are also planning to make FIFA a free-to-play game in order to compete against Konami’s eFootball.

So, Konami are ready to take the extra steps to compete with FIFA. Among all the upcoming football games, eFootball stands the best chance to finally break EA Sports’ monopoly over the football game segment.

Strikerz Inc. is going to bring a new football game, UFL. The main mantra of the game is ‘Free to Play’ and ‘Fair to Play’. So from the mantras, we can easily conclude that UFL will also be a free-to-play game like eFootball.

According to an article by IGN India, ‘Fair to Play’ is the core idea that drives what it’s trying to achieve, and ultimately its weapon in the fight against FIFA.

EA Sports’ FIFA makes more money from players buying packs than actually selling the game. The loot box nature and pay-to-win aspects of FUT have been under heavy scrutiny for years now. So, Strikerz Inc. wants to keep away from this approach completely. They believe that the player’s skill level, and nothing else, should determine how successful they are in their football game.

Eugene Nashilov, CEO of Strikerz Inc. said: “This is one of our core principles, essential for everything we do. We believe that our players’ success should not depend on the number of in-game purchases or the value of donations they make, but on their gaming skills, experience and mastery. You will never be obligated to purchase anything in UFL to achieve high ranks and remain competitive.”

“The fair-to-play concept also means that we will regularly add new features and updates with no mandatory payments or yearly fees. Free to play is an established distributional model in the gaming industry and one we want to bring to the football simulation genre. We believe the fair-to-play model will make our game much more appealing for all the football lovers out there.”

“In UFL, players will be able to control all aspects of the game, ranging from teams’ composition to what tactics and formations will be used in the upcoming match. Your path to victory is determined by your skill and ability. In other words, our game is designed to be a fair-to-play experience that implies a skill-first approach and zero tolerance for pay-to-win options.”

It seems UFL is taking it another step ahead of Konami’s free-to-play eFootball by bringing in their ‘Fair to Play’ concept. The game has been in development for around 5 years and as we understand, it will still require a couple of years at least to hit the market.

The game definitely promises to be a game-changer if their gameplay is at par with FIFA, even if not better. After taking so long to develop, it certainly has high hopes from the football gaming community.

As the bio of the game reads, ‘GOALS is a AAA play to earn football game. Free to play, cross-play, multiplayer first and esports ready’, we understand that the way forward is to make a free-to-play game and get maximum players onboard.

However, Goals’ mainly focuses on the multiplayer and esports segment of the game. It will also have a cross-platform feature so that players across any platform can ultimately compete in this esports ready football game.

We don’t really know much about the gameplay or features of the game. But as it seems, it is going under development and some intelligent people are behind this, so it definitely has the chance to make it big upon its arrival to the market if it keeps up on its promise of play to earn football game which is free to play, cross-play, multiplayer first and esports ready.

So, here we come to the end of our list of the best upcoming football games that will compete with EA Sports’ FIFA. However, we would like to mention that one of the most important aspects of the football game, in order to attract players, is proper licensing of the players and clubs. No one would like to play with an unknown character. The idea of playing with your favourite football player is what attract more and more players every day. EA Sports has a vast library of licenses which will be hard to beat for any of the upcoming games.

Another thing, even if any of these games don’t turn out to be as expected, it will be overall good for the football gaming industry as it will push FIFA to bring changes in their game as well.

If these games are at least successful to force FIFA to make it ‘Free to Play’ and ‘Fair to Play’ and give more focus on the game development, then it will be a win-win situation for every gamer who is into football gaming.

Previous articleAll you need to know about Apple’s free repair services to iPhone 12 and iPhone 12 Pro
Next articleRealme 8s 5G launching soon in India, will be powered by the MediaTek Dimensity 810 5G